Album Review: Dreamboats & Petticoats - Bringing On Back The Good Times

There appears to be plenty of life left in the Dreamboats and Petticoats franchise as this new compilation spread over 4 CD’s whets the appetite yet again for fans of 1960’s music. 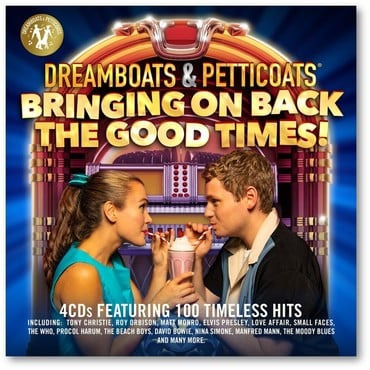 The compilers have realised that an older generation still buy CD’s either to play at home or in their cars though most car manufacturers these days do not supply a CD player in their vehicles.

Yorkshire’s very own Tony Christie asks (Is This The Way) to Amarillo? The original version to me always sounds better than the updated version with Peter Kay.

The pure pop of these two tracks contrasts with the soul of The Four Tops with I Can’t Help Myself and Dance To The Music by Sly and the Family Stone. The flower power influence pops up on the Edison Lighthouse Number 1 hit, Love Grows (Where My Rosemary Goes) and It’s Getting Better from Mama Cass.

CD2 goes under the name of Good Vibrations, aptly starting off with The Beach Boys classic of the same name. David Bowie takes the listener back to the start of his career with Space Oddity, whilst The Byrds remind us of Mr Tambourine Man. Some hits sound more dated than others and very much of their time like I Got You Babe by Sonny and Cher and In The Year 2525 by Zager and Evans.

Fans of this era of pop music will know that The Troggs were the ones who had the hit first with Love Is All Around and not Wet Wet Wet.

CD3 entitled On The Road Again starts off with the Canned Heat single of the same name whilst The Who deliver the timeless Pinball Wizard - from Soho down to Brighton this track will definitely be one to play in the car. Two other timeless tracks are Nights In White Satin from The Moody Blues and (I Heard It) Through The Grapevine which are included on CD3.

CD4 is called It's Now Or Never and starts with Elvis Presley singing the song. Dusty Springfield was one of the best British soul singers and after listening to I Just Don’t Know What To Do With Myself you will agree. One hit wonder Peter Sarstedt asks Where Do You Go To (My Lovely)?

A CD compilation of this calibre would seem amiss if it did not include You’ve Lost That Lovin’ Feeling and The Walker Brothers Make It Easy On Yourself - both songs that are a part of Sixties culture as much as the Mini car and Carnaby Street.

As The Shadows close this comprehensive compilation with Young Lovers I am sure that there will be plenty of now older lovers out there who will enjoy this collection.
Also by Graham Clark...
Remembering Meat LoafAlbum Review: The Sherlocks- World I Understand (Teddy Boy Records)Interview With Steve HackettAlbum Review: Elvis Costello And The Imposters - The Boy Named IfInterview With Tony Clarkin From Magnum