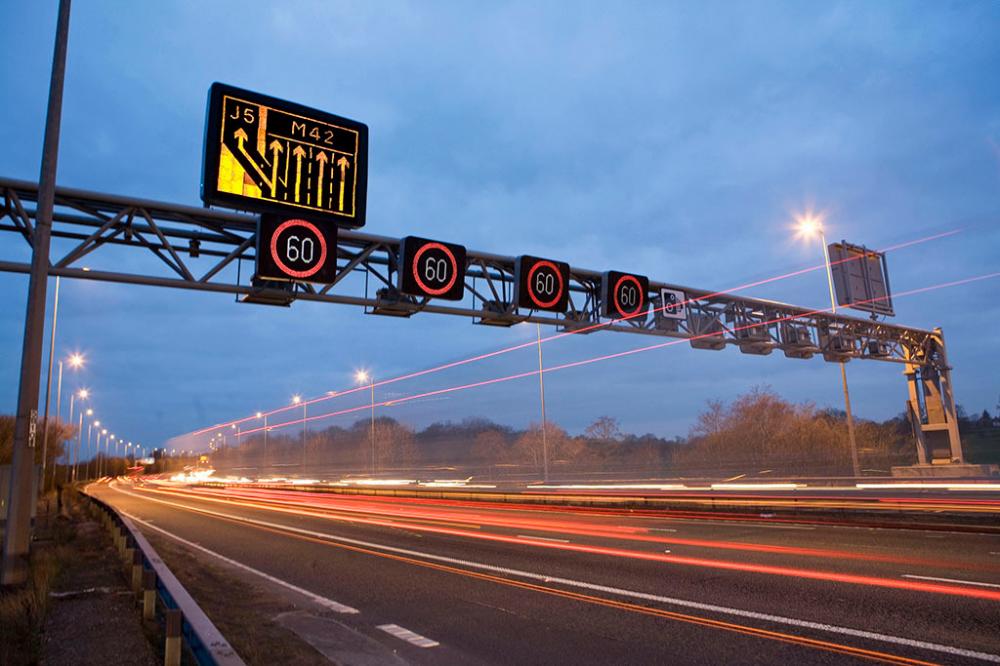 The rollout of new smart motorway schemes will be paused until a full 5 years’ worth of safety data is available, as the Department for Transport (DfT) invests £900 million to improve safety on existing all lane running (ALR) motorways.

In line with the Transport Committee’s most recent recommendations, the rollout of new ALR smart motorways will be paused until a full 5 years’ worth of safety data becomes available for schemes introduced before 2020. After this point, the government will assess the data and make an informed decision on next steps.

This will include investing £390 million to install more than 150 additional emergency areas so drivers have more places to stop if they get into difficulty. This will represent around a 50% increase in places to stop by 2025, giving drivers added reassurance.

DfT has welcomed the Transport Committee’s report, which endorsed its focus on further upgrading the safety of existing ALR smart motorways rather than reinstating the hard shoulder. As concluded by the committee, evidence suggests hard shoulders do not always provide a safe place to stop, and by reducing motorway capacity, they could put more drivers and passengers at risk of death or serious injury if they were to divert onto less safe local roads.

Transport Secretary Grant Shapps said:
"One of my first actions as Transport Secretary was to order a stocktake of smart motorways and since then, I have worked consistently to raise the bar on their safety. I am grateful to the Transport Committee and to all those who provided evidence for its work.

"While our initial data shows that smart motorways are among the safest roads in the UK, it’s crucial that we go further to ensure people feel safer using them.

"Pausing schemes yet to start construction and making multimillion-pound improvements to existing schemes will give drivers confidence and provide the data we need to inform our next steps. I want to thank safety campaigners, including those who have lost loved ones, for rightly striving for higher standards on our roads. I share their concerns."

National Highways CEO Nick Harris said:
"We have listened to public concerns about smart motorways and we are fully committed to taking forward the additional measures the Transport Committee has recommended.

"While we pause those all lane running schemes yet to start construction, we will complete the schemes currently in construction. We will make existing sections as safe as they can possibly be and we will step up our advice to drivers so they have all the information they need.

"We are doing this because safety is our absolute priority and we want drivers to not just be safer, but also to feel safe on our busiest roads."


Independent road safety campaigner, Meera Naran, whose 8-year-old son Dev, died in a motorway crash on the M6 in 2018, said:
"Conventional and smart motorways both have their risks and benefits. I welcome this pause in the rollout of smart motorways, which will give us all a positive opportunity to assess the future of our motorway network.

"I’m encouraged by the commitment of £900 million to improve the safety of our motorways, following my campaigning since Dev died. However, I’ll continue to both challenge and work alongside the Department for Transport to ensure even more is done, including calling for legislation to be looked at for autonomous emergency braking and further support for ongoing driver education."

The government’s response to the Transport Committee builds on the significant progress already made against DfT’s 18-point action plan to improve smart motorway safety, announced in March 2020, including adding emergency areas and upgrading cameras to detect red X offences.

The measures in the Stocktake and Transport Committee response represent over £900 million of improvements in total, including £390 million of new money for extra emergency areas, with the remainder of the funding delivering other measures, such as stopped vehicle detection and concrete central reservation barriers.

National Highways will also ramp up communications so drivers have better information about how to drive on smart motorways.

While DfT will be taking forward all the recommendations set out in the committee’s recommendations, it does not agree with the view that smart motorways were rolled out prematurely or unsafely. All ALR smart motorway schemes are, and will continue to be, subject to high standards of design, risk assessment and construction, followed by detailed monitoring and evaluation once opened to traffic.

While further data is being collected, National Highways will continue work to complete schemes that are currently in construction, which will all open with technology in place to detect stopped vehicles. These schemes are all more than 50% completed and halting progress on them now would cause significant disruption for drivers.

Design work will also continue on those schemes already being planned, so they are ready to be constructed depending on the outcome of the pause. No preparatory construction work will take place.

Also, in line with the committee’s recommendations, National Highways will pause the conversion of dynamic hard shoulder (DHS) motorways – where the hard shoulder is open at busy times – into all lane running motorways while it investigates alternative ways of operating them to make things simpler for drivers. National Highways will also install technology to detect stopped vehicles on these sections.

Car insurance expert at Confused.com Alex Kindred says:
“Our research found that drivers are concerned about the safety of smart motorways, with more than two in five (42%) thinking that they are dangerous, so it's positive to see that these concerns are being recognised. But this just pauses the rollout of new all-lane running motorways, it doesn’t do anything to address the confusion created by the existing all-lane running stretches as hard shoulders aren’t going to be reinstated.”

“Between trying to navigate changing variable speed limits and finding a safe place to stop when the hard shoulder lane opens, more needs to be done to educate drivers on these rules. By default, the speed limit is 70 mph but this can change on a smart motorway. A red ring overhead means that the speed limit is mandatory, a flashing amber ring means it’s advisory based on driving conditions. And whether the hard shoulder is open or not will also be clearly indicated in the overhead signs. Our advice on motorway driving rules will help to clear up any common confusions so that you can make sure that you’re safe on the road.”

Tom Hixon, Head of Instructor Support at Bill Plant Driving School, says:
“Many people are concerned with the dangers of all-lane smart motorways after numerous deaths and incidents being reported in the last few years. With the hard shoulder being removed to make space for the extra lane, drivers facing an emergency should be made aware of what the steps to follow are in order to remain safe while on a smart motorway:

If your car breaks down while you’re driving on an all-lane running motorway, or you’ve gotten into an incident, the only area where you’re allowed to stop is the emergency refuge area (ERA), which can be found at intervals along the motorway. Once at the ERA, make sure you have turned on your hazard lights, so that you’ve made yourself visible to other drivers. The next move is to exit the vehicle and go seek refuge behind the crash barrier, getting yourself out of the way from other vehicles speeding down the motorway.

However, if you cannot reach the ERA, stopping your car can be extremely dangerous. You must move on to the verge and, again, turn on your hazard lights to signal your emergency to the other vehicles. In the case in which the ERA can’t be reached and you’re not even able to drive to a verge you must not leave the vehicle at any moment and should immediately call 999 for help.

“Whilst it is important to decrease congestion, it must not be at the cost of safety - so allowing another five years to collect data on the existing smart motorways is crucial. The Government has also pledged to make improvements to existing schemes, which will make all drivers, new and experienced, feel safer. If you are ever feeling anxious about driving on a smart motorway, book a lesson with a driving instructor - who can show you how to correctly observe the system and drive cautiously.”