A blind veteran from Lancashire is set to march at the Cenotaph in London this Remembrance Sunday (14/11) with the charity Blind Veterans UK. 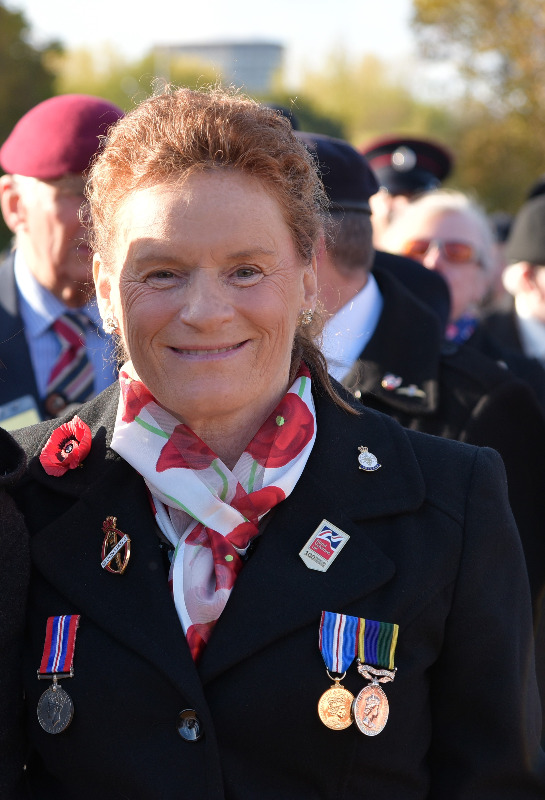 Maria Pikulski 60, from Preston, will be marching at the Cenotaph as part of the national Remembrance Sunday commemorations with more than 30 other blind veterans supported by Blind Veterans UK, the national charity for vision-impaired ex-Service men and women.

Maria joined the Women’s Royal Army Corps in 1980 before moving to the Territorial Army in 1991.

Maria says:
“I was an HGV class 1 Driver in the Royal Logistics Corps and I also worked in administration and as a chef”.

Maria began to lose her sight in 2003 when she was diagnosed with Leber’s Hereditary Optic Neuropathy, a hereditary condition that is rare in women.

She says:
“My sight went in one eye and then six months later it went in the other eye. I was a nurse at the time and I felt like my life was over”.

Fortunately, Maria found out about Blind Veterans UK and started receiving support from the charity in 2004.

She says:
“The charity has really saved my life. They’ve built my confidence up and made me realise that there is life after sight loss. When I first visited the charity’s training and rehabilitation centre in Brighton, I met another blind veteran called Fred Bentley who had been blinded on the beaches of Dunkirk. He was my saviour. He was totally blind and lived an independent life so I knew that I would be able to too”.

The charity has supported Maria with IT training weeks and peer support.

She says:
“When I joined the charity it was great to meet so many other veterans that I could relate to. I currently work full-time as an Eye Clinic Liaison Officer and help people who have lost their sight to find the services that are out there. I always ask them if they have served in the forces so they can receive the support that I did. I have referred a lot of people to Blind Veterans UK and have met many of them again through the charity at reunions and the centres”.

In September this year, Maria cycled from London to Brighton with her husband Richard, to raise funds for Blind Veterans UK.

She says:
“We decided to do the bike ride on a tandem. It was a tough challenge because 75% of the journey was uphill. It took us nine hours in total and we ended the challenge at the charity’s Brighton centre. It was lovely that staff members came to meet us and congratulate us when we arrived!”

Maria will be marching with fellow blind veterans at the Cenotaph this Remembrance Sunday.

She says:
“I will be so proud to march on Remembrance Sunday, this will be my 17th march. I am really looking forward to being able to march this year, as I was meant to attend last year but it was cancelled due to the pandemic. On the day, I will be thinking about all those that lost their lives for us”.


Blind Veterans UK was founded more than 100 years ago to support those blinded in the First World War. Now, the charity supports veterans regardless of when they served or how they lost their sight. Throughout the pandemic the charity has supported veterans, particularly those who are most vulnerable; whether they need food delivered, medication from their pharmacy or a friendly voice over the phone. Blind Veterans UK still runs over 45 virtual group support sessions a week.

Chief Executive of Blind Veterans UK, Major General (Rtd) Nick Caplin CB says:
“This year we will hopefully be able to experience a more normal Remembrance Sunday once again and it will be fantastic to march with veterans like Maria once again.

“More than 90% of the blind veterans we support are over 70 and so were most at risk from COVID-19.

“We have found new ways of supporting them throughout the last 18 months and it has meant that we have been able to keep them connected as well as ensuring practical support is still there for the most vulnerable.”

Visit https://www.blindveterans.org.uk/ to learn more about the charity and how you can support its vital work today.