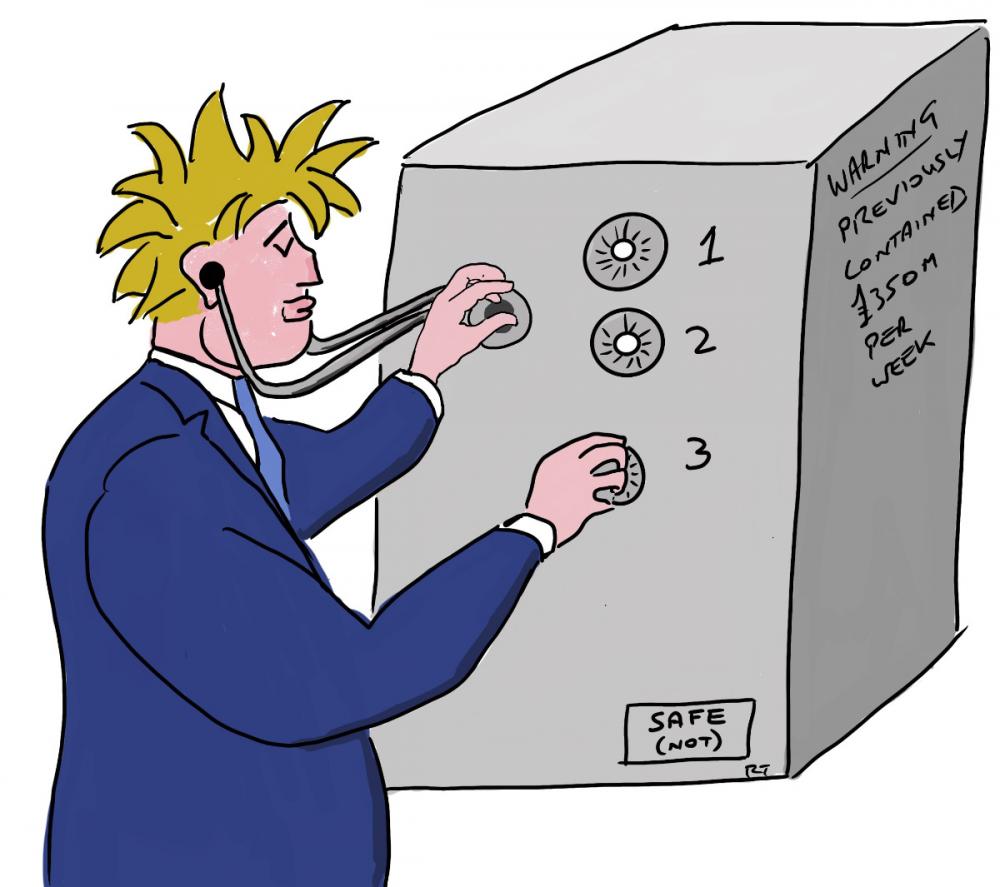 After several days of feverish feculation in the press, Boris Johnson has at last unveiled his long-awaited plan: to lose the next general election by breaking a load of manifesto promises. No, sorry, I meant his plan to reform social care. Despite Johnson telling us the plan was ready two years ago, it gave the impression of having been knocked up on the back of a fag packet by Michael Gove after a bangin’ night out in Aberdeen. And if you bet that Gove looks good on the dance floor, I’m afraid you may have lost your stake.

We’re quite used to Johnson producing guff in the Commons, and this was no different as he farticulated his vision for fixing social care, while taunting Labour that they haven’t got a plan. Sorry, Boris, but based on this evidence, neither have you.

Labour could have retorted that they did indeed have a plan for social care – the National Care Service described in their 2019 manifesto – but Keir Starmer rather seems to have developed selective memory where that’s concerned. Yet still the ghostly spectre of Jeremy Corbyn continues to manifest, with the Telegraph accusing the Tories of becoming Blue Labour and labelling Johnson as the ‘Cobalt Corbyn’.

Surprisingly - and despite the impression you may have got last year - the plan to fix the social care crisis wasn’t to kill off everyone in a care home by sending in Covid. Rather, in direct contravention of the Conservative manifesto pledge not to increase tax or national insurance, the government imposed the biggest tax rise in the last half century in order to increase funding for the NHS. And maybe, eventually, social care would get some of the money, once NHS waiting lists are down again. By my calculations, that will probably be, erm, never.

The justification for the broken promise was that no-one could have predicted the pandemic. It’s odd, then, that Rishi Sunak had reiterated that the government wouldn’t be raising tax or NI just six months ago, one year after the pandemic began. I’d like to think he was vaguely aware of the pandemic by that point.

Anyway, wasn’t the plan ready and costed two years ago, before the pandemic happened? You could almost think that Johnson had simply made that up.

Mind you, the Conservative election manifesto also pledged the triple-lock guarantee for pensions, and that promise has also been broken. Then there was the other recent broken manifesto promise not to cut overseas aid. Odd, isn’t it? You wait ages for one broken manifesto promise and three come along at once. It’s like buses – they also have bullshit promises about NHS funding written on them.

I guess we’re still waiting for that £350m a week refund they told us we’d get back from the EU. It must be the lorry driver shortage that means it can’t be delivered.

Johnson suggested that his plan would deal with the problems of social care “after decades of inertia by the Labour party”. Hm. Can someone tell him that Labour was last in power more than a decade ago?

With news emerging that there is now shortage of sewage treatment chemicals due to Brexit, there is serious concern about how the country will deal with the pile of excrement that comes out of Johnson’s mouth.

As Labour accused the Conservatives of hitting ordinary working families hardest, Johnson continued to insist that he has “put [his] arm round the British people”. That’s really best avoided. The only time Johnson puts his arm round anyone is to get into their wallet or into their knickers.

At the same time as putting taxes up, the government is also about to cut Universal Credit again. Jacob Rees-Mogg commented that “we have to balance the books”, as though he didn’t stash all his own millions away in offshore trusts. No doubt his own books are very well balanced indeed: half in the Cayman Islands, half in the British Virgin Islands.

All in all, the social care plan – and I use that term very loosely - looks about as effective as the one the government had to evacuate Kabul. But never let it be said that the Afghanistan mission was a failure. After twenty years of military operations and billions of pounds spent, we’ve managed to replace the Taliban with, er, some other members of the Taliban. Dominic Raab has insisted that the UK will not recognise the Taliban. I thought that would be easy. They’re the ones now wearing American uniforms and carrying American guns.

The government has promised it will “shift heaven and earth” to rescue more Afghans from the country. Heaven and earth but not the sea, because that’s closed.

As the British forces completed their evacuation, there was some concern over whether a portrait of the Queen had been left behind in the British embassy. Raab told parliament that orders had been given to destroy it. Outrageous! He’s trying to erase our history! They should have just left it behind with some contextual notes – retain and explain, as they like to say. Failing that, couldn’t they have just asked a few students to get rid of it?

It has also been reported that the Taliban are tightening control, implementing a ban on protest demonstrations, and warning that people must secure permission before any protests or face “severe legal consequences”. Hm. That reminds me of another government slightly closer to home. I wonder if the Taliban have met Priti Patel? They might change their minds about having women in government.