“It’s ok, this one’s only bitten me seven times,” said Gabriel Gutsa, pointing at a small, innocuous looking snake, “but that one,” he added, gesturing at a second glass-fronted terrarium, “is different. If he gets you then we probably have about six hours to get you to hospital!” 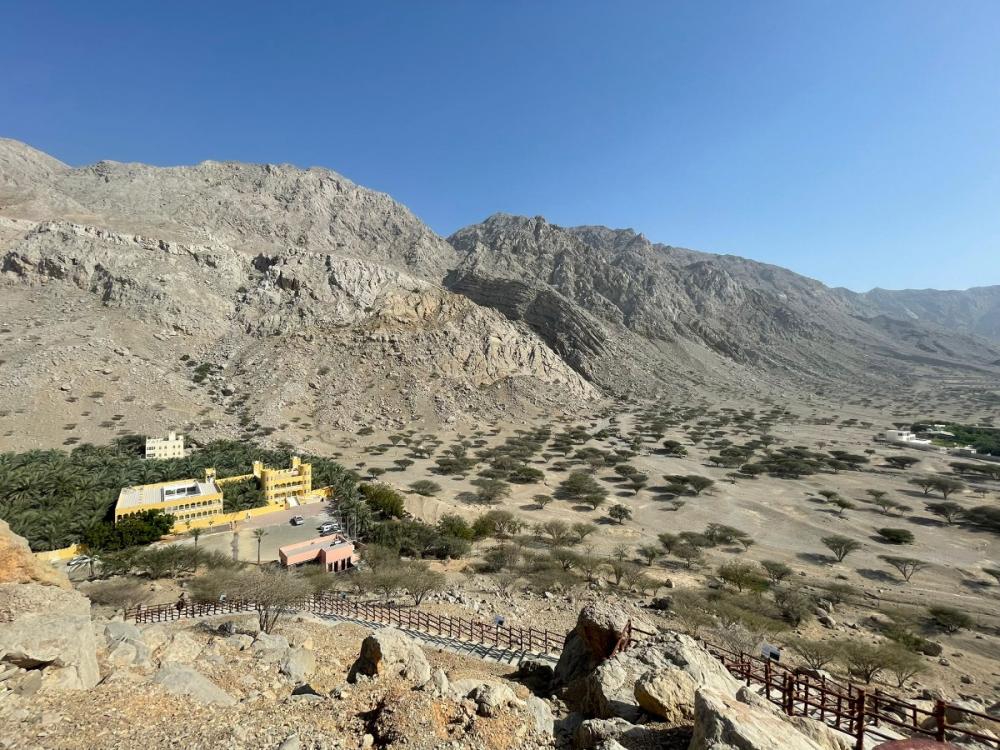 My genial host didn’t need to finish his sentence but paused momentarily for effect before laughing out loud and commenting that there were plenty of things that could ‘get you’ in these parts.

But, with Gabriel at your side, somehow you knew it was going to be the snake’s unlucky day! 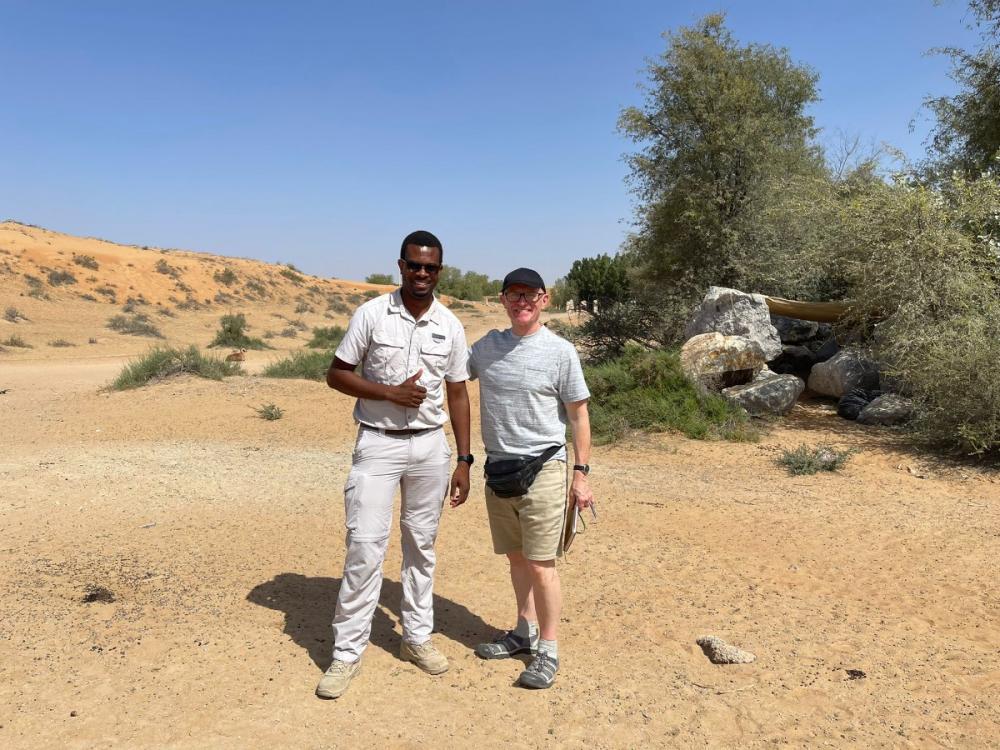 This tall Zimbabwean – and seemingly font of all wildlife knowledge - has been part of the fixtures and fittings at the Ritz Carlton Al-Wadi Desert Nature Reserve in Ras Al Khaimah, United Arab Emirates (UAE) for the last six years, now serving as its Recreation Manager.

And apart from being a stunning hotel with 100 villas – the giveaway is in the name – this Marriott operated property occupies just 15% of a 500-hectare site, that also doubles as a wildlife conservation centre and nature reserve. 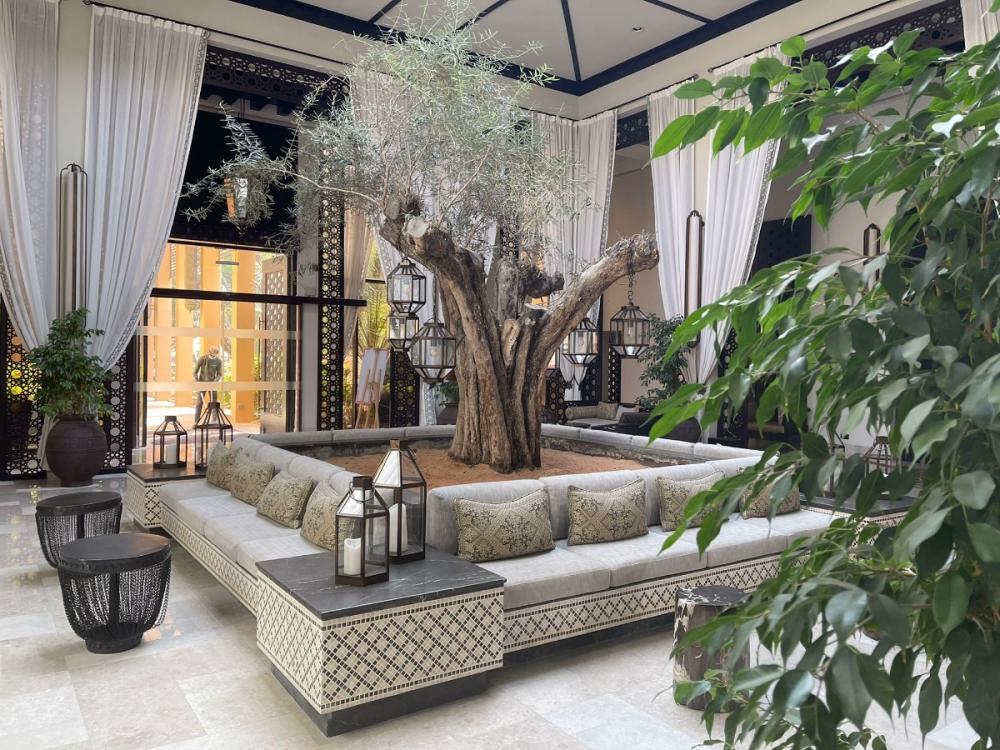 Littered with deep-rooted evergreen ghaf trees, that line the site like a waiting army, the hotel courtyard and its 300-year-old olive tree, lead unsuspecting guests, Alice in Wonderland like, through a door and into the glorious reserve with its camels, wildlife and white Arabian oryx antelope. 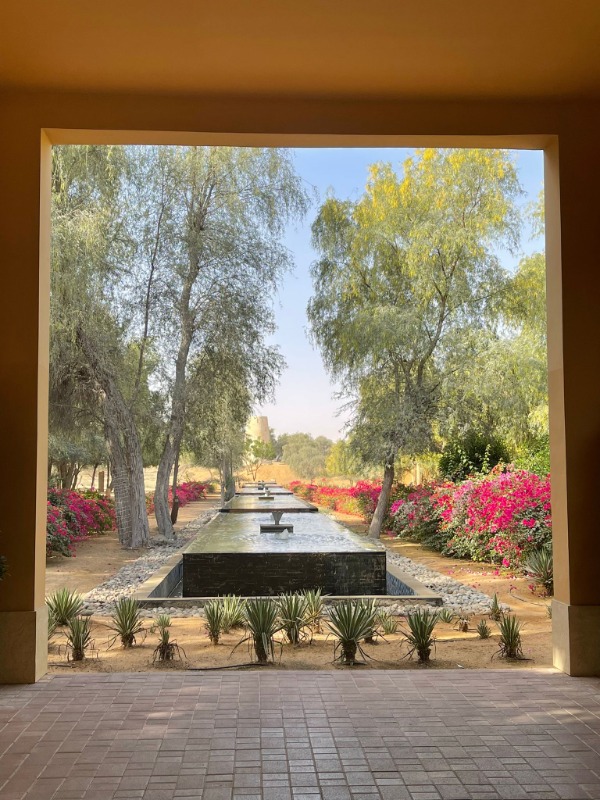 “They are referred to as the ‘Lion Killer’ in Africa,” said Gabriel, which was hardly surprising considering that each one, with few exceptions, had two needle-pointed horns, some measuring up to 85cm each.

“Oryx are white, unable to camouflage themselves and were hunted to near extinction in the 1930’s,” he said. “This reserve was set up 12 years ago to ensure their survival.” 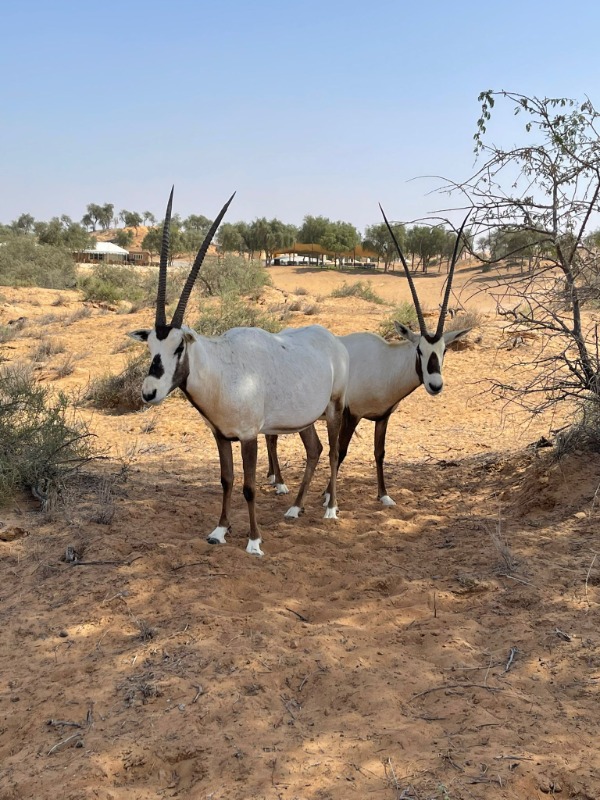 And, in some ways, it is a story of preservation and sustainability that now permeates this ‘newest’ of the UAE’s seven Emirates, which joined the Middle East ‘club’, so to speak, in 1972. Now, Ras Al Khaimah Tourism Development Authority (RAKTDA) has debuted a new vision for Jebel Jais, the highest mountain peak in the UAE, as part of the Emirate’s new destination strategy focused on sustainable tourism, eco-conservation and growth.

And, as more and more people look towards responsible, nature-driven travel, its projects have been purpose built with that very ethos in mind.

Designed to integrate seamlessly into the mountain ecosystem and enhance knowledge and understanding of conservation, the developments on Jebel Jais align perfectly with the tourism board’s Sustainable Tourist Destination Strategy, which will see Ras Al Khaimah become the regional leader in environmentally conscious tourism by 2025.

My wife was determined not to scream: I couldn’t be so sure!

We were somewhere in the region of 1484m above sea-level at the top of Jebel Jais and, at that moment, strapped into something resembling a flying suit, waiting to be launched from the longest zipline in the world: 2.831km with the promise of at least two minutes ‘flying time’! 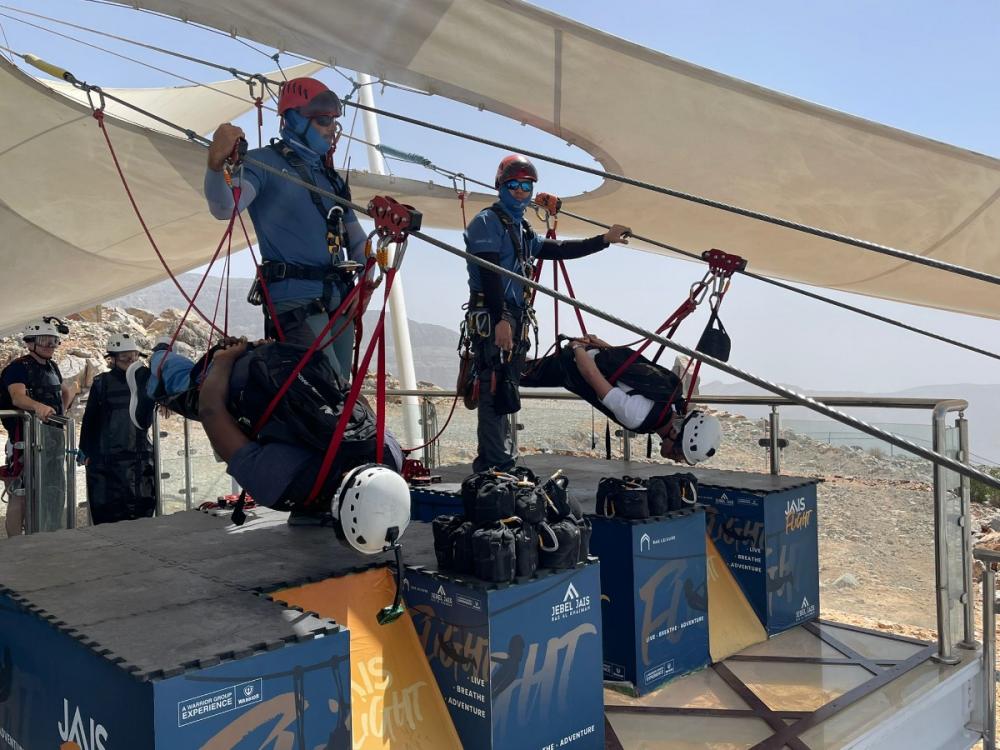 “Now I know what a drone feels like,” panted my excited Filipino partner, just minutes later, proceeding to describe her excitement in Tagalog before reverting back into English! “And I didn’t scream,” she triumphed. I did although I preferred to call it a deep roar, more akin to the sound a male lion might make!

But the experience was AMAZING! 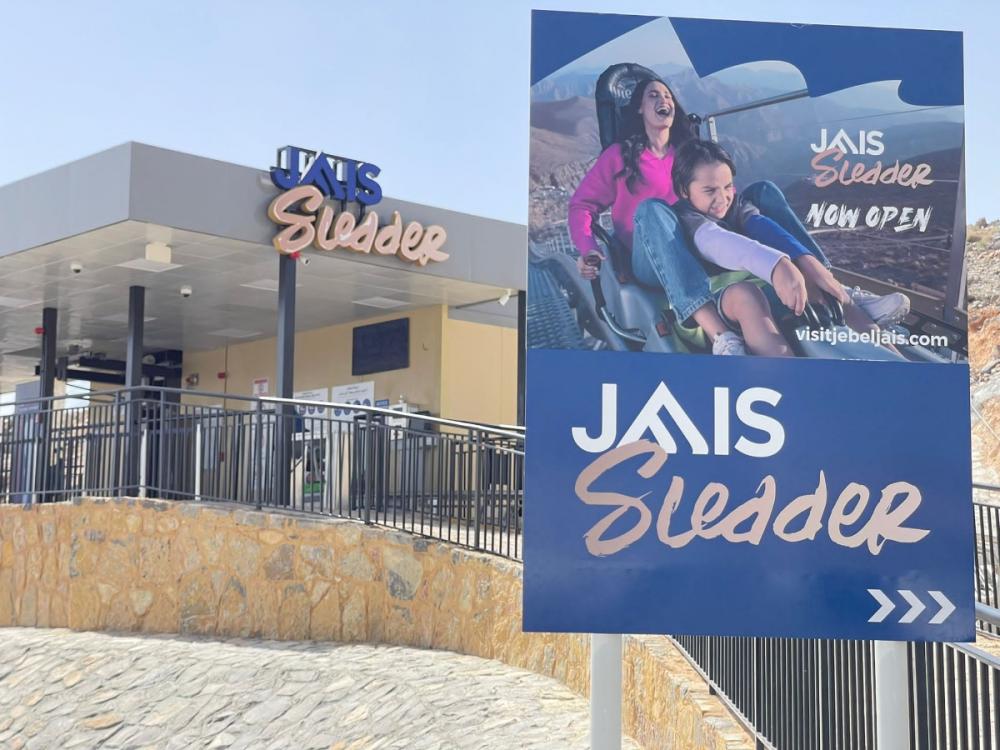 And, as soon as we got to the end of the wire, a small minibus ferried ‘flyers’ back to the top of Jebel Jais, just in time for lunch at 1484 by Puro, the highest restaurant in the UAE. 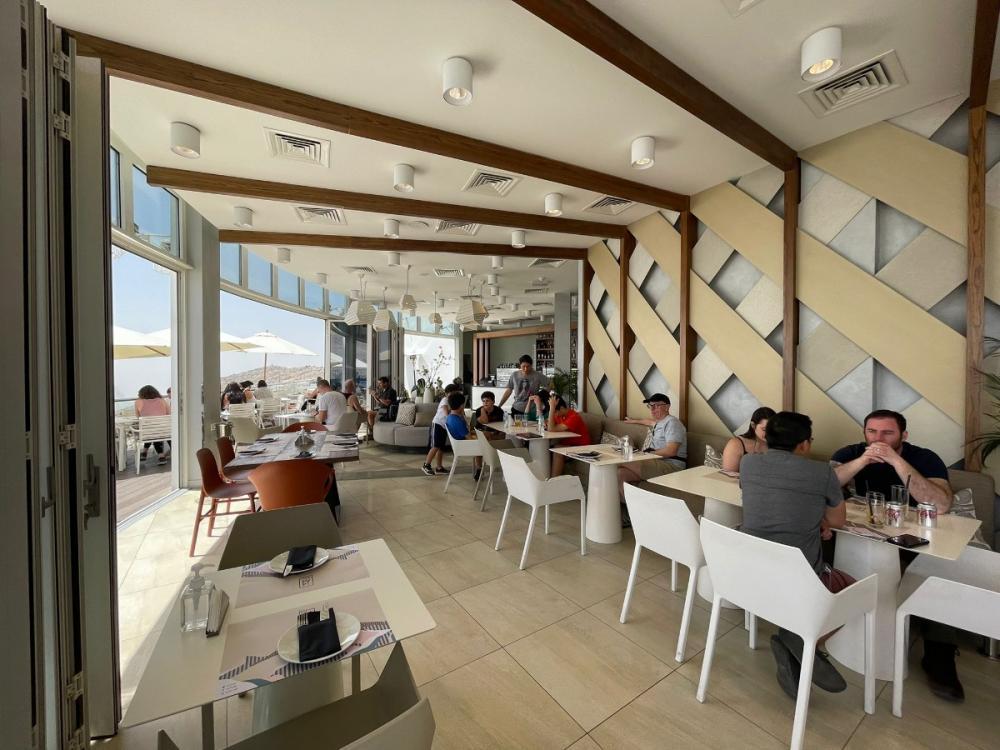 For once, this was something that neither Abu Dhabi or Dubai could compete with: they can’t lay claim to the highest mountain in the UAE from which to string a wire or build a restaurant at the top of, meaning Ras Al Khaimah has just triumphed in this round of one upmanship!

“As the custodians of our beautiful Emirate, it’s our job to protect and conserve the Hajar mountains which is home to Jebel Jais,” comments Raki Phillips, CEO of RAKTDA.

“It is undeniable that nature is at the heart of our destination with stunning topography, ranging from long stretches of pristine beachfronts and sprawling deserts to, of course, spectacular mountain ranges.

“This is front and centre of our new destination tourist strategy, to become the regional leader in environmentally conscious tourism by 2025, so that we can welcome three million visitors annually by 2030 in a responsible and purposeful way.” 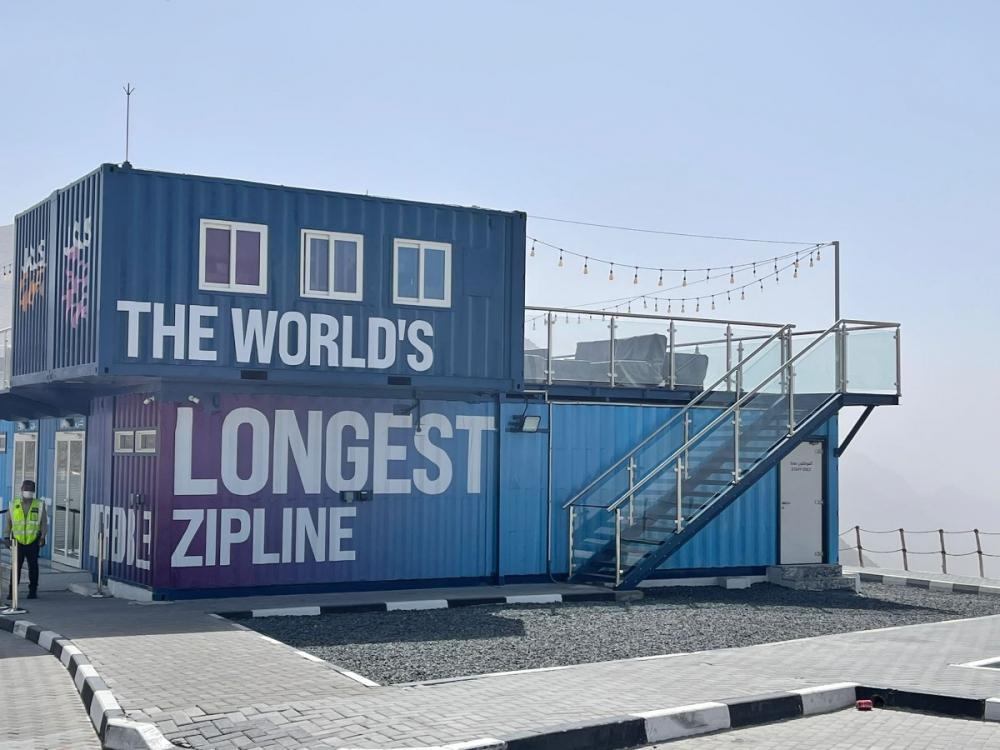 And it is a boast that is backed up with a major £96m cash injection. The Jais Adventure Centre is now home to adrenaline pumping, awe inspiring, cloud piercing adventures and experiences, including hiking, e-mountain biking, the region’s longest toboggan ride and paragliding with the promise of much more to come.

Even British adventurer Bear Grylls is getting in on the act lower down the mountain with the opening of his first Bear Grylls Explorers Camp, home to abseiling, climbing and extreme survival experiences. 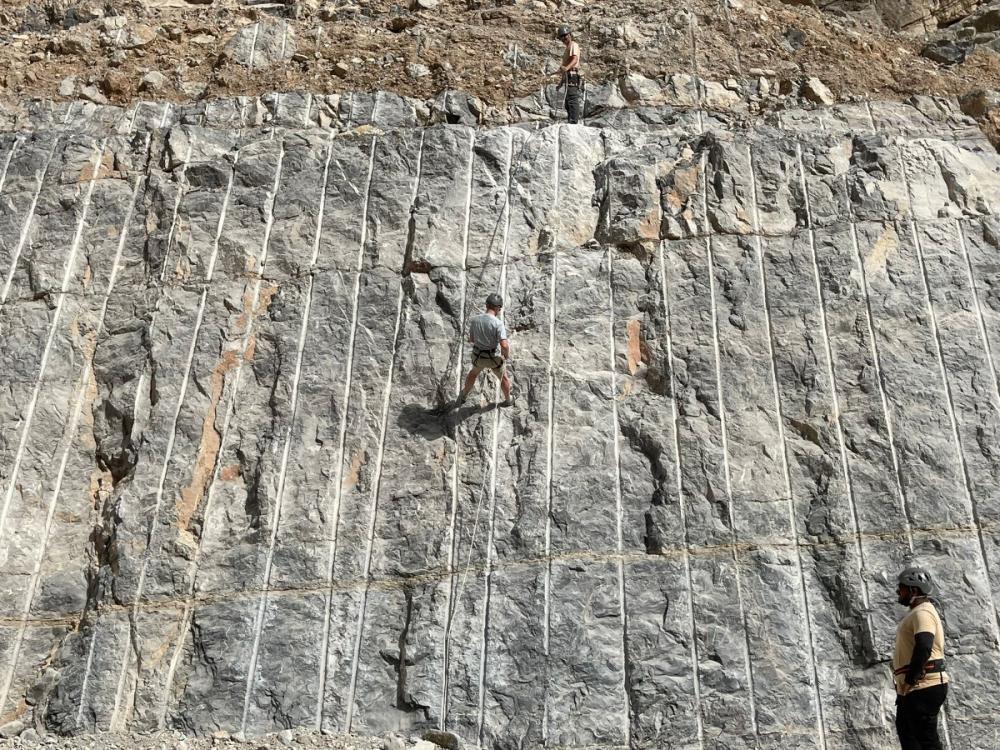 Elsewhere in the Emirate there is a real sense that something is happening and even hotels are playing their part. 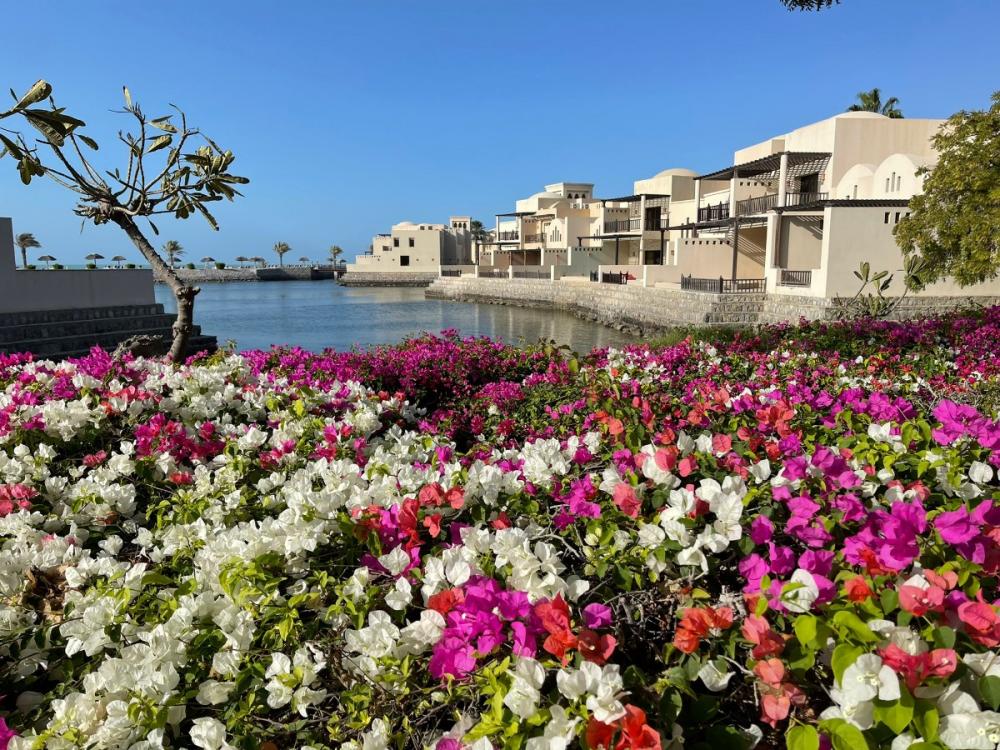 We were staying at the 349 room Cove Rotana Resort, where green, clean electric energy cars, akin to small golf buggies, silently ferry holidaymakers around the sprawling site with little more than a gentle whir. The property proudly displays recycling certificates and remains committed to the reduction of plastic waste. 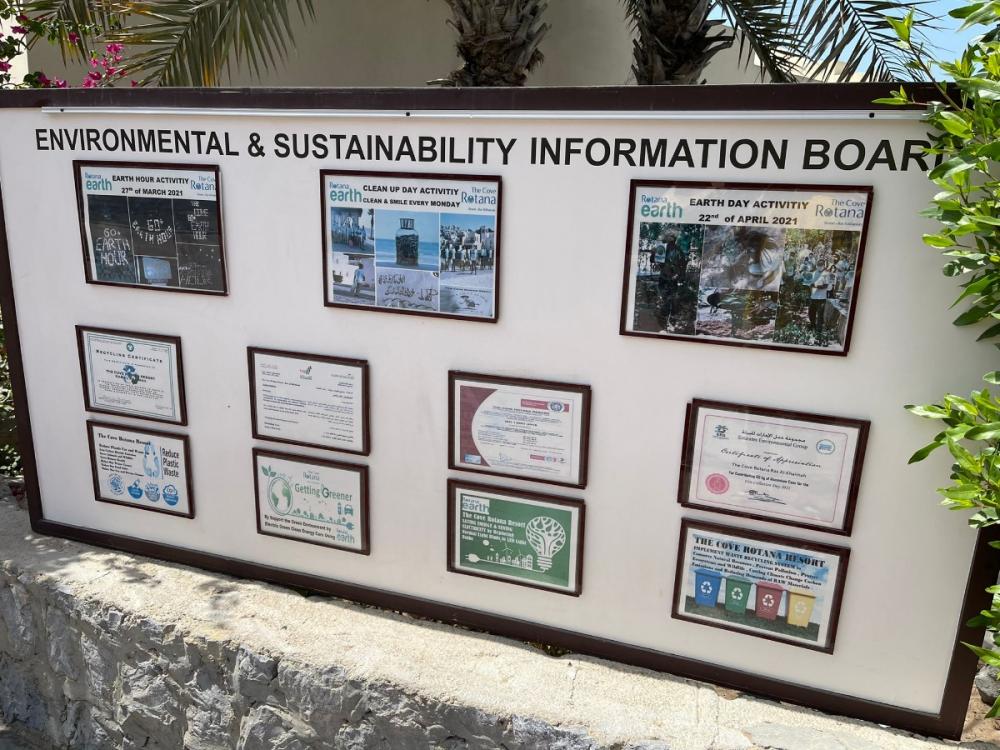 The Cove Rotana Resort has a unique fusion of Arabian culture and traditional charm buoyed by an army of wonderfully polite Nepalese, Indian, and Asian staff, always eager to deliver the impossible and invariably doing so! 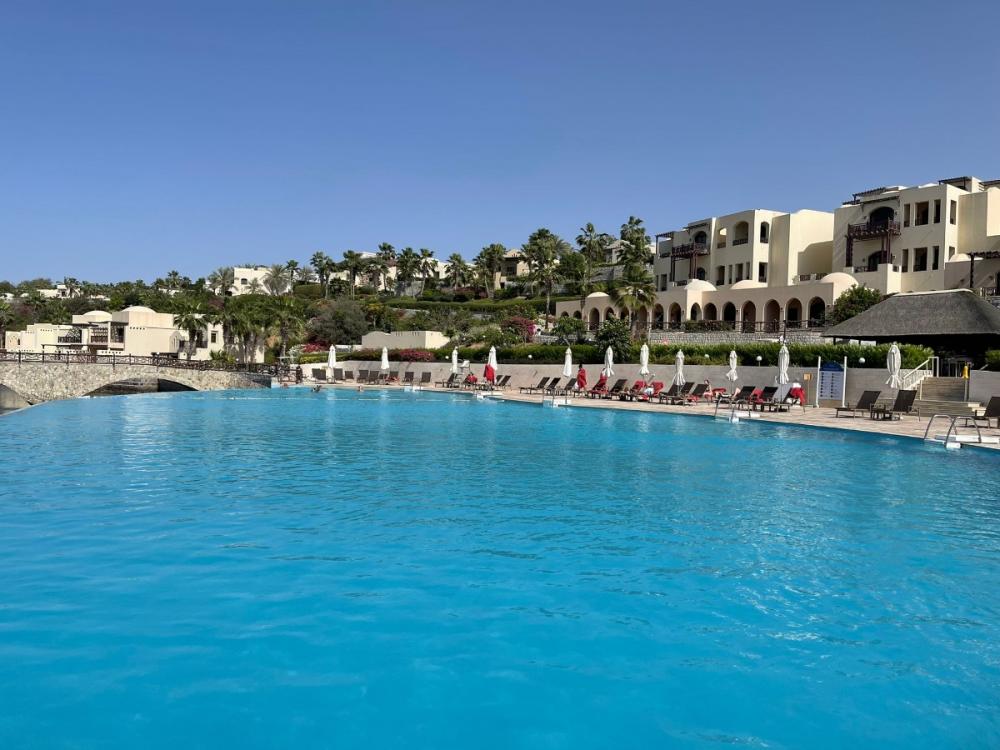 With two restaurants, four bars and 600m of private beach there is rarely time to enjoy the free Wi-Fi, just the spa and all other evidences of holiday decadence.

“We are now in our 10th year,” said Suqrat Altunije, one of the key figures behind RAKs Fine Arts Festival, located at the Al Jazirah Al Hamra Heritage Village.

The annual affair now attracts some of the world’s top artists and who better to leave his stamp on this increasingly prestigious show than Suqrat: educated in Florence, Italy, and now trumpeting the arts in his home Emirate. 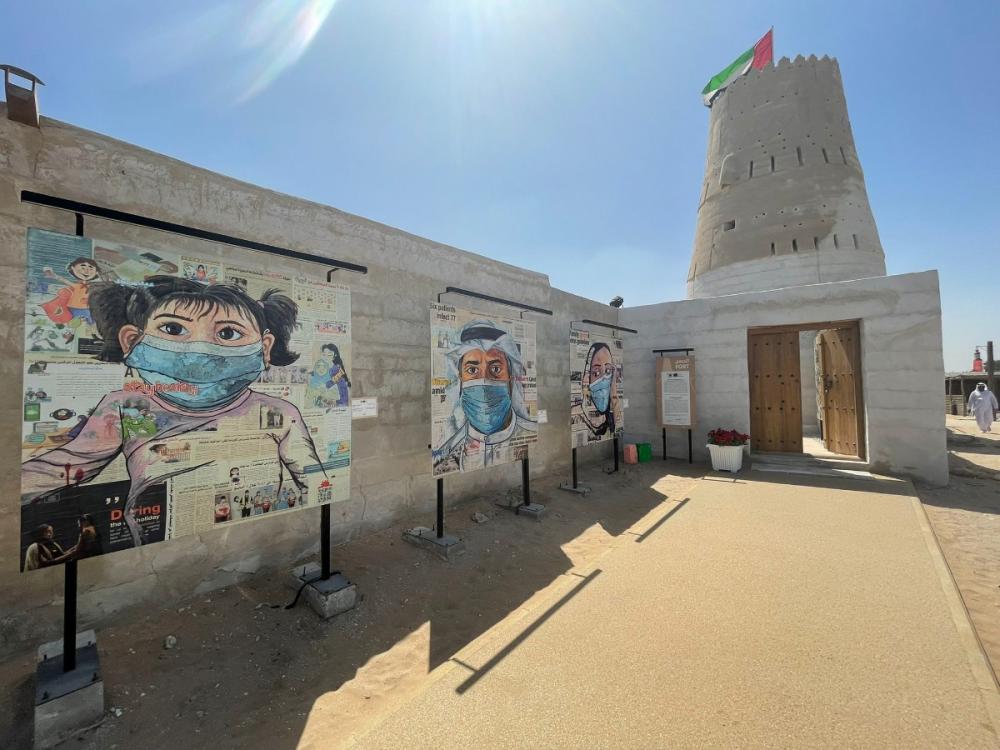 Even he has become a sustainability champion. “Many of our photographic exhibits this year were printed on recyclable mesh and the aim is to turn them into bags for next year’s event,” he said. It was a recurring theme: look after the planet and the planet will look after you.

We’d been in the boat for about 10 minutes before we arrived at the Suwaidi Pearls floating platform, anchored off shore. 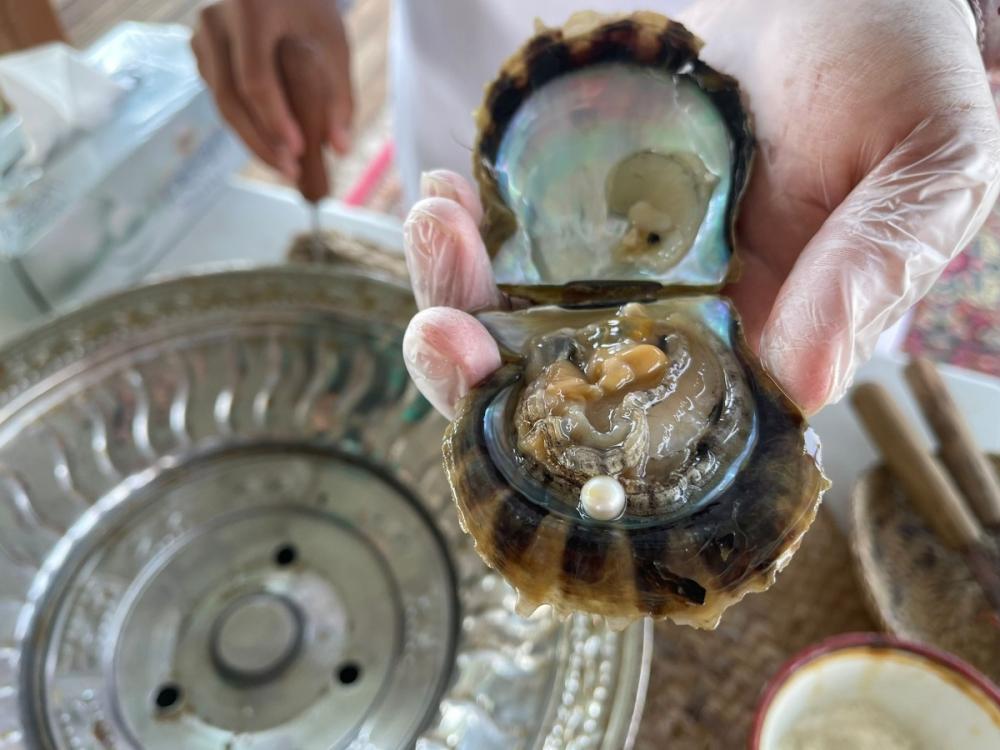 The United Arab Emirates and Ras Al Khaimah, in particular, have an extraordinary pearl fishing history that dates back over seven millennia. 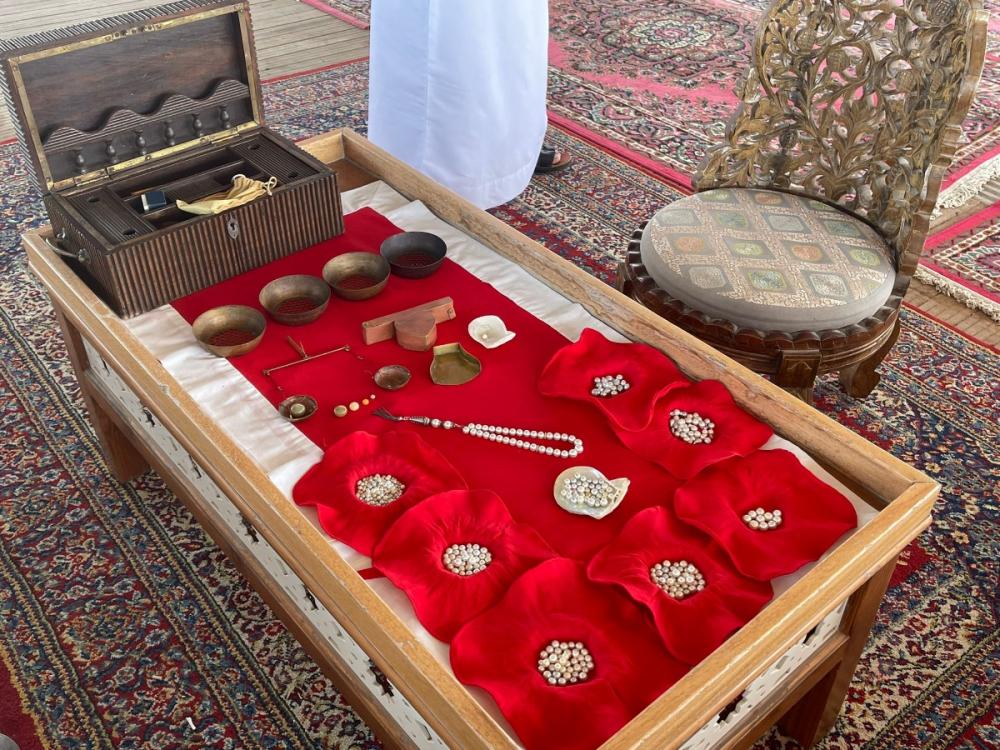 Celebrating the history of pearl fishing in Ras Al Khaimah, Abdulla Al Suwaidi opened Suwaidi Pearl Farm in honour of his late grandfather, Mohammed, a man who could disappear underwater for minutes at a time in search of valuable Dana and Yakka pearls. 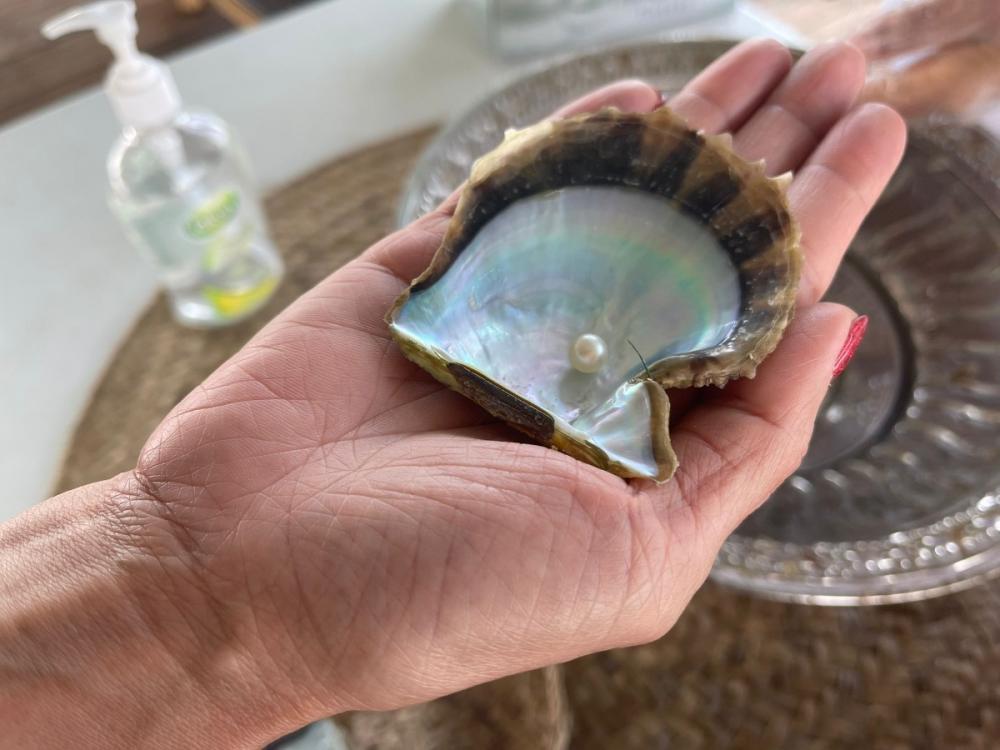 The current day Suwaidi Pearls Farm is in Al Rams, the northernmost neighbourhood of Ras Al Khaimah, at the foothills of Jebel Jais mountain and visitors can explore Mohammed’s relationship with the ocean and pearls while understanding why Ras Al Khaimah is fondly referred to as ‘the pearl of the Emirates’.

Nawfal Saeed Ahmed was quite a character and is one of the few people who left my Filipino wife doubled up in laughter with a dubious joke that only a Filipino would understand! 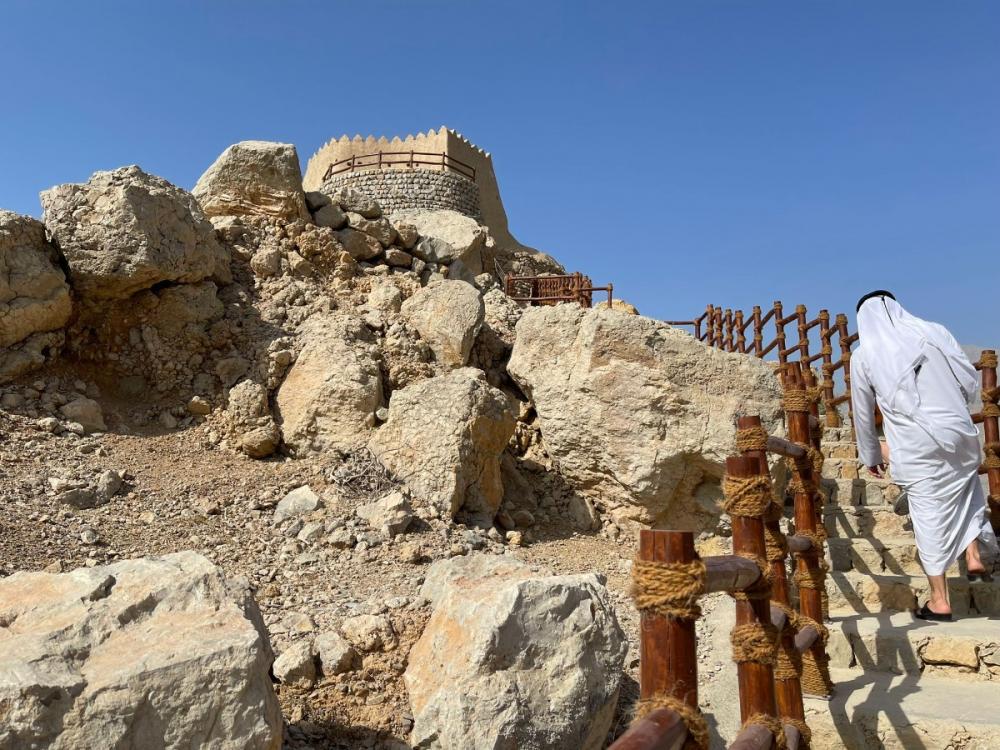 We had just climbed the 239 steps to Dhaya Fort, at the top of a conical shaped hill, which has served as a natural defence post for the surrounding oasis for centuries. The views were stunning. 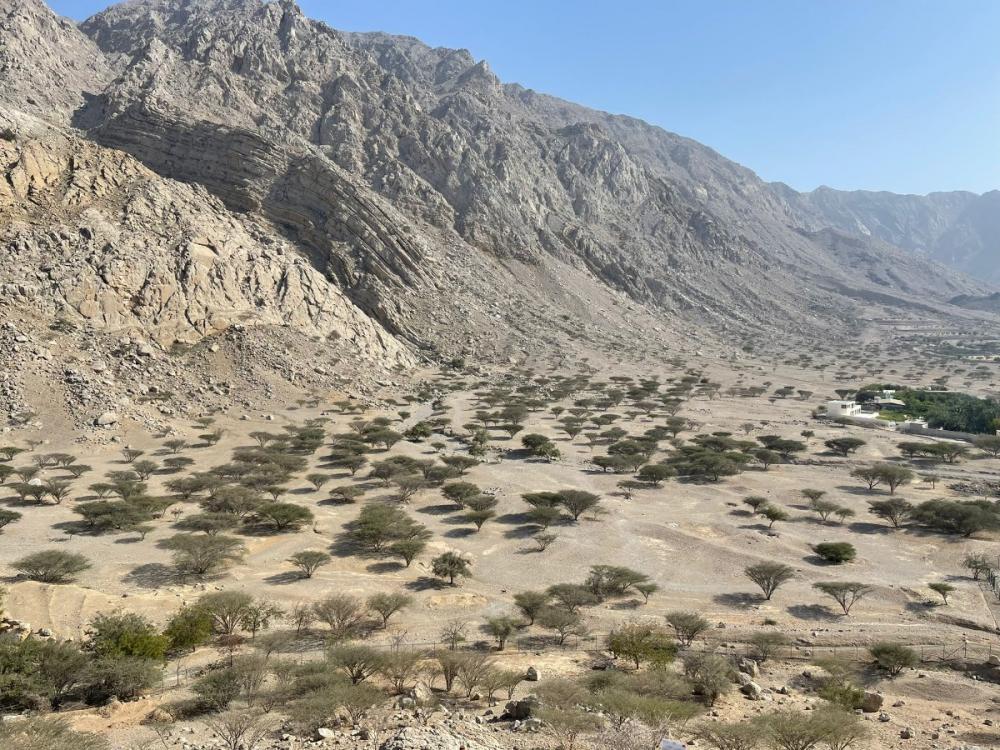 “The king decreed that no building could be higher than three floors,” explained Nawfal, “which is why the 360 degree views are exceptional.” No one was going to challenge him on that one. For once my vision was unimpaired and, without my varifocals, there was still a view to die for!

We had just had a whistlestop tour of Ras Al Khaimah. It was hot, fascinating and I could feel the cool breeze at the top of Dhaya Fort. RAKTDA boss Raki Phillips had given me a taste of his tourism vision for the Emirate….and I’d enjoyed every minute.

This wasn’t Dubai and neither was it Abu Dhabi or Sharjah, even though all four form part of the same UAE.

The production is still in rehearsal but take your seats, for the main show is about to start. Prepare to be wowed by the dazzle of Ras Al Khaimah, youngest of the Emirates but certainly a star in the making. This critic recommends the show, available to view in the UAE between now and 2030!