Two weeks after the incident packed Grand Prix at Imola in northern Italy the Formula 1 paddock reconvened at the rollercoaster Autódromo Internacional do Algarve in the hills inland from Portimão for today’s Portuguese Grand Prix and Sir Lewis Hamilton’s latest victory for Mercedes extended his championship lead over Red Bull’s Max Verstappen. 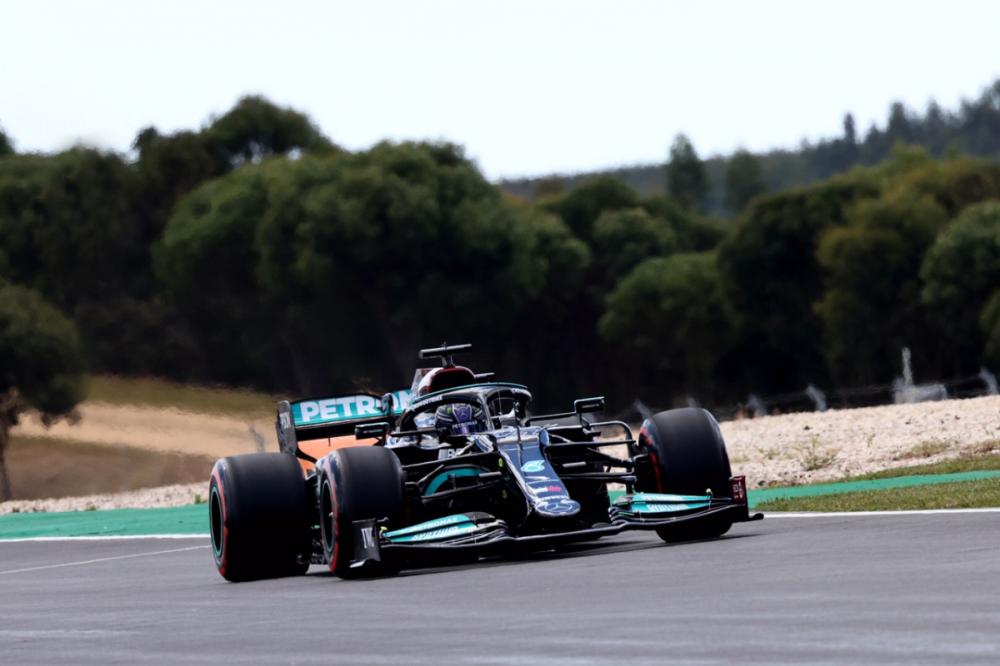 Hamilton proved untouchable in the Algarve
Following last Monday’s significant announcement that there had been unanimous agreement amongst the FIA, F1’s owners Liberty Meda and all the teams to hold three sprint qualifying races later this season, it was very much time in Portugal to focus on the job in hand, namely to conquer the high-speed blind crests of this undulating circuit which requires total commitment.

Fortunately it is also one of the easiest tracks on the calendar for overtaking and particularly when DRS assisted into Turn 1 after the long start-finish straight. A secondary DRS zone had been added too between Turns 4 and 5. Unlike at old-school Imola, this Portuguese venue has plenty of smooth run-off areas where the main punishment for getting things wrong isn’t likely to be an appointment with the barriers, but intervention from the stewards for exceeding track limits. Last year a mighty 194 lap times were deleted for such transgressions, so in theory at least, if not in practice, all the drivers very much knew they needed to be careful to avoid further wrath on this front.

Prior to the Portuguese event British driver Callum Ilott, who finished as runner-up to Mick Schumacher in last year’s Formula 2 championship, was appointed as the second reserve driver for the Alfa Romeo team in addition to Robert Kubica. Already a member of the Ferrari Driver Academy, the 22 year old was delighted to be told he would be running in Friday’s opening free practice session, taking over Antonio Giovinazzi’s car. 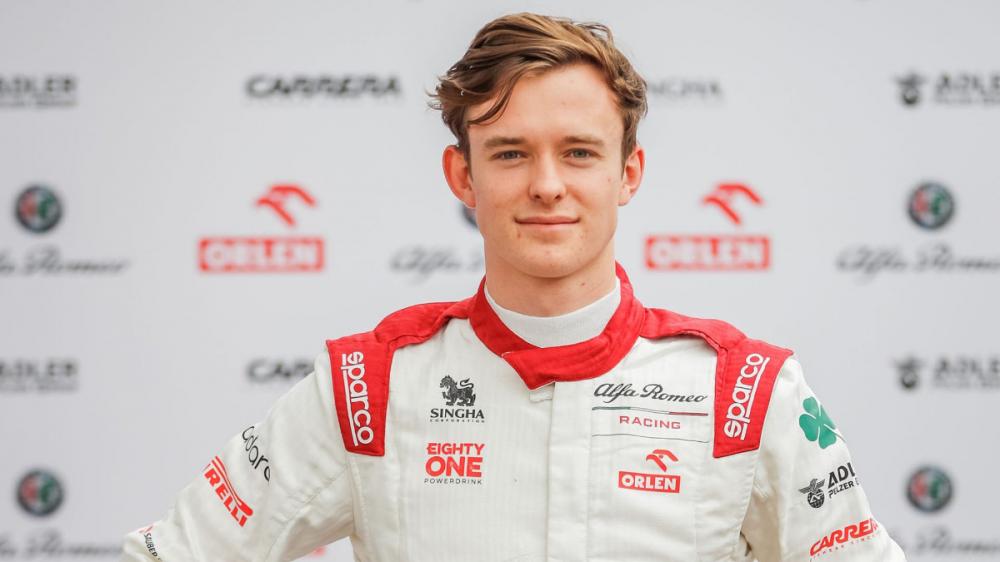 Callum Ilott made his F1 debut for Alfa Romeo in the opening practice session
It was officially confirmed last Wednesday that for a second year running the Canadian Grand Prix will not take place due to COVID-19 related issues, with a 14 day quarantine period mandatory for all F1 personnel arriving in the country impossible to achieve. Instead its 11-13 June slot will be taken by another race at Turkey’s Istanbul Park circuit, a venue which proved popular on its return to the revised 2020 calendar last November. On the plus side for the Montreal promoters, at least their F1 contract has been extended to run until 2031.

In Friday’s opening free practice period Mercedes’ Valtteri Bottas traded fastest times with Verstappen, with the former emerging on top and the latter complaining of severe vibrations late in the session. The Red Bull of Verstappen’s team-mate, Sergio Pérez, and the Ferrari piloted by Charles Leclerc proved to be the best of the rest, with Hamilton fifth and Williams’ George Russell showing impressive early pace just two places to his rear.

The start of the second practice period had to be delayed by 10 minutes whilst a drain cover at the exit of Turn 11 was repaired, but come the end of the hour long session Hamilton had topped the practice timings for the first time this season ahead of Verstappen, Bottas and Ferrari’s Carlos Sainz. It was windy, overcast and cooler for Saturday’s final practice, which was interrupted briefly by a Virtual Safety Car period to deal with an errant advertising hoarding at the final corner which had blown over, but come the chequered flag the advantage had swung back in Verstappen’s direction as he led the way, with Hamilton, Bottas and Pérez in his wheeltracks. 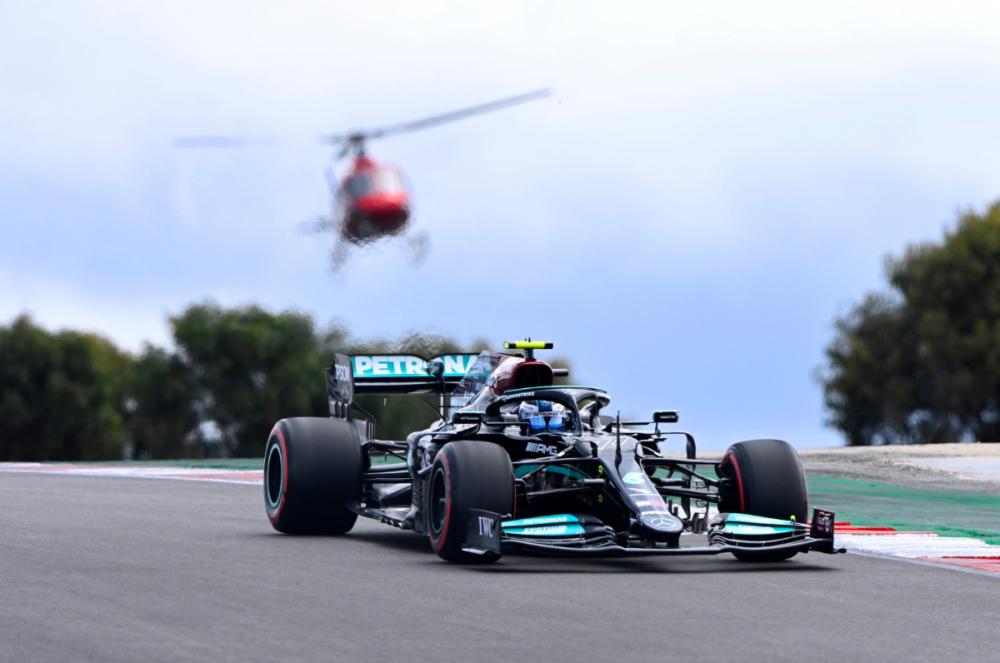 Poleman Valtteri Bottas with a TV camera helicopter in hot pursuit!
Qualifying followed a couple of hours later, with Hamilton hoping to take his 100th F1 pole position, but that honour was earned by Bottas, with the reigning champion just 0.007s adrift and set to join the Finn on the front row for the following day’s Grand Prix. McLaren’s Daniel Ricciardo had been a surprise departure in the first part of the three-stage qualifying process and Russell just missed out on the top ten shootout, but there was better news for Aston Martin’s Sebastian Vettel who did make it. In contrast, Verstappen was clearly disappointed to be only third fastest after his best lap, which would have been good enough for pole, was deleted due to breaching track limits at Turn 4 when a tail wind caught him out. This left the frustrated charger from the Netherlands to line up on an all Red Bull second row with Pérez.


Also by Graham Read...
The Pandemic Forces Further F1 Calendar ChangesA 100th Pole And A Sixth Spanish Victory For Hamilton﻿F1 Approves Sprint Races At Three 2021 Grands PrixDoncaster’s Ewen Sergison Claims A Podium Finish In MonacoVerstappen Sublime At Incident Packed Imola
As the start of this afternoon’s 66 lap race approached a one-stop strategy seemed to be the favourite option due to the low tyre degradation at this track due to its smooth but low grip surface. The four Mercedes and Red Bull drivers were all starting on the medium compound rubber, but tyre strategy as the Grand Prix developed was going to be crucial, with the teams having to choose between switching at some stage to the soft or hard alternatives. Interestingly Ferrari had hedged its bets with fifth on the grid Sainz starting on softs and eighth placed Leclerc on mediums.

Come exactly 3pm local and UK time and with the weather a little warmer, the cars set off on their formation lap and when those famous red lights went out we had a clean start as the leading trio maintained station, but Sainz used his soft tyres to usurp Pérez for fourth by the time they reached the opening corner.

The Safety Car was soon called into action though as at the start of the second lap the veteran Kimi Räikkönen clipped the rear of his Alfa Romeo team-mate Giovinazzi as they sped down the start-finish straight, badly damaging his front wing and forcing him into immediate retirement. With the resultant debris cleared and Räikkönen’s car moved to a place of safety, racing resumed on the seventh tour and Bottas nailed the restart, as Verstappen also swept past Hamilton into second place at Turn 1. Four laps later though Hamilton got the better of Verstappen to slot in behind his leading team-mate. 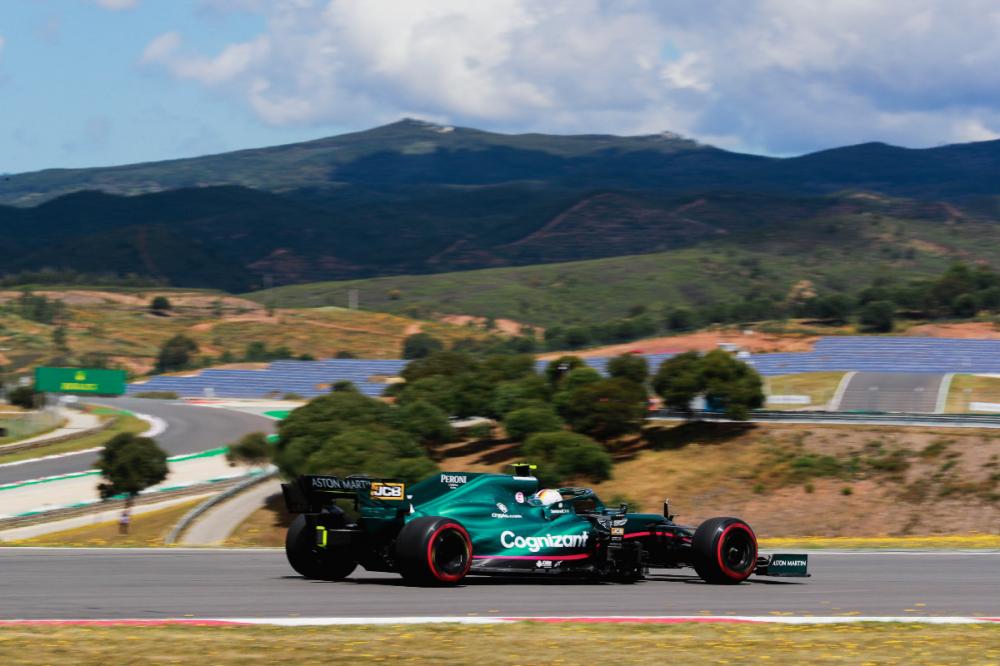 Aston Martin’s Sebastian Vettel reached the final part of qualifying, but finished the race outside the points
The pattern of the race was soon set, with Bottas, Hamilton and Verstappen clearly in a class of their own and already eight seconds clear of fourth placed Pérez. The reigning champion was understandably in no mood to just settle for second place and on lap 20 swept round the outside of Bottas at Turn 1 to take the lead. Verstappen was the first of the front quartet to pit, switching from medium to hard rubber on the 36th tour, a move which led Mercedes to respond just one lap later by bringing Bottas in for the same change. The Finn rejoined the track still just ahead of Verstappen, but the Red Bull ace quickly demoted him with a clean pass up the inside at Turn 5.

Mercedes then pitted Hamilton for hard tyres and he headed back out in second place behind Pérez, who had yet to stop, but ahead of Verstappen and Bottas. The Monaco based driver subsequently passed Pérez for the lead on lap 51 as they flew down the pit straight and the Mexican was quickly called in to put on soft rubber to see him through to the end of the race and also try to gain the extra point for the fastest lap. This he soon did, whilst well ahead of him Hamilton, Verstappen and Bottas still ran as the front trio.

The drama wasn’t quite over yet though as, with the chequered flag fast approaching, Bottas and then Verstappen were brought in for soft tyres in search of that extra point and on the final lap the Mercedes driver went quickest to claim it before the Red Bull team leader snatched it from him by going even faster, only to have his effort deleted for exceeding track limits at Turn 14. 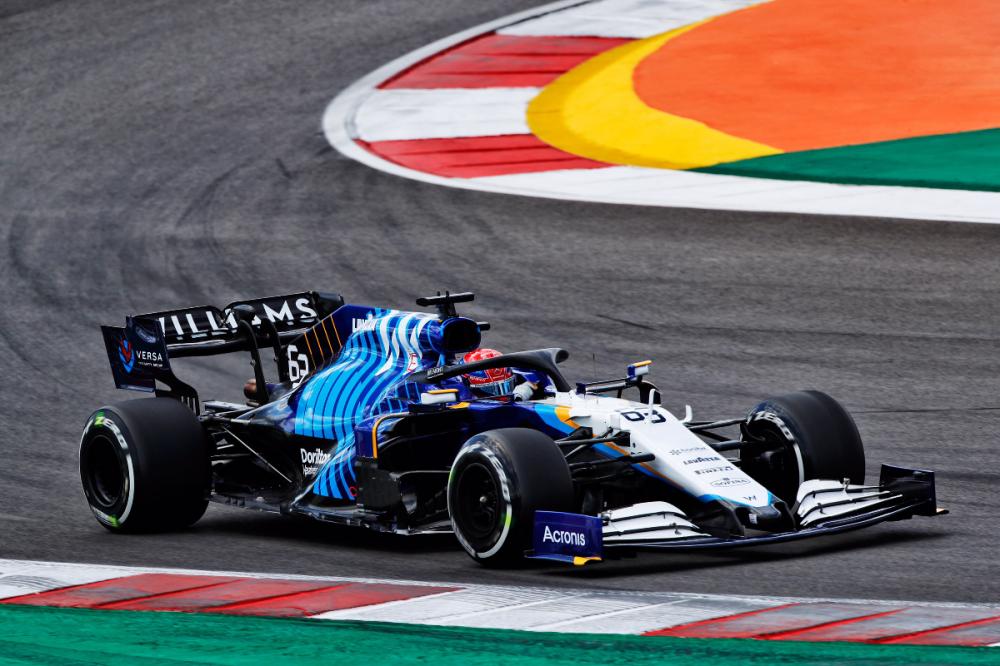 Williams’ George Russell again outpaced his team-mate, but had to settle for a 16th place finish
So the podium trio proved to be Hamilton, Verstappen and Bottas, with the winner achieving his 150th points scoring finish for Mercedes. Pérez was a distant fourth, as McLaren’s Lando Norris and Leclerc completed the top six.

There was little time to pause for reflection after the Grand Prix as the crews immediately had their own race to get the pit garage set-ups derigged and packed away as soon as possible, with team transporters set to travel through the night on their 800 mile journey back into Spain and up to Barcelona where the next event on this year’s Formula 1 calendar will take place in just a week’s time. Life rarely stands still in the high speed world of international F1 motor racing.