Leclerc On Top In Australia As Verstappen Retires Again

After two opening races on consecutive weekends last month, today Formula 1 held its third Grand Prix of the season in Melbourne, Australia and it was Ferrari’s Charles Leclerc who dominated whilst Red Bull’s Max Verstappen suffered a second retirement of the season. 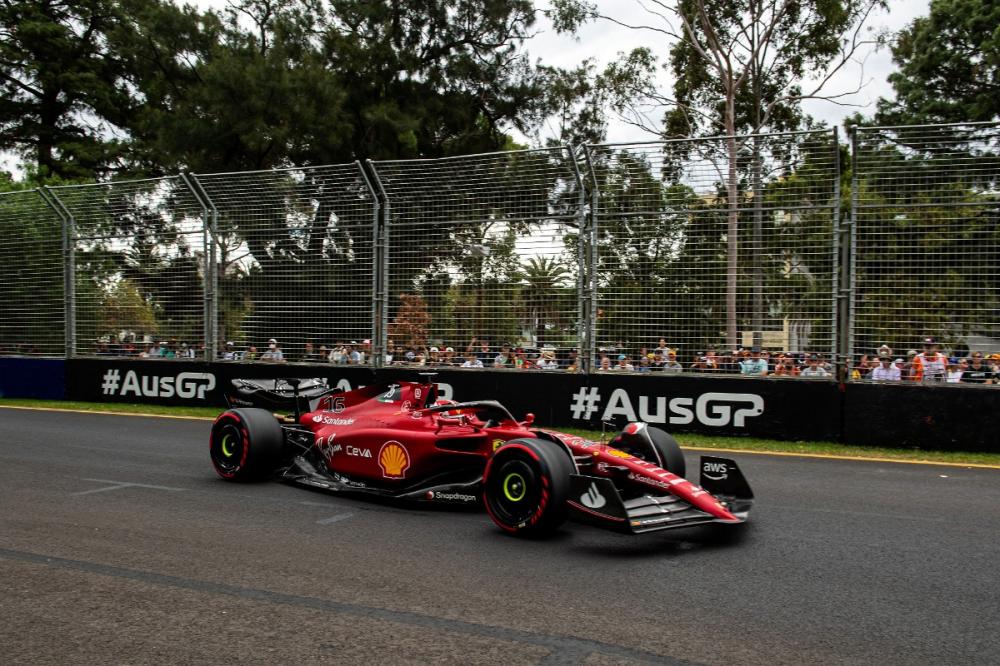 Ferrari’s Charles Leclerc was in a class of his own in Australia
This weekend’s visit to the Albert Park circuit represented F1’s first Grand Prix in Australia since 2019 due to the pandemic. The Albert Park track had recently been reprofiled in various places in the hope of increasing overtaking opportunities and this was also set to be assisted by the use of a record four DRS zones for the first time in any Grand Prix, the previous maximum having been three. However, the zone between Turns 8 and 9 was subsequently removed on safety grounds. In the build-up to the event the team strategists had been optimising their plans for the race, which in the past had usually been a one-stopper due to low tyre degradation rates. However, they were all aware that the projected higher speeds and improved overtaking, together with potentially increased tyre wear and a reduced pit lane time loss due to a higher speed limit, could make a two-stop alternative more viable.


Meanwhile, Williams’ Thai-British racer Alex Albon had arrived down under with a three-place grid penalty in his luggage after making contact with Lance Stroll’s Aston Martin during the previous race in Saudi Arabia.
Formula 1’s official freight partner DHL had had to step in with assistance a week ago when a ship transporting plenty of team equipment had hit delays en route to Australia, meaning it would arrive late. DHL arranged for the freight to be offloaded in Singapore and flown onwards to Melbourne, arriving last Monday and enabling everyone to get set up properly for this weekend. The double impact of rising fuel costs and the war in Ukraine has seen F1 freight transportation costs rise up to twentyfold, with a corresponding negative effect on budgets.

On the driver front, Aston Martin’s four time world champion Sebastian Vettel was very much looking forward to at last starting his season after having had to miss the opening races in Bahrain and Saudi Arabia due to Covid and Alpine’s Australian reserve driver Oscar Piastri, who turned 21 last Wednesday, was enjoying a return to his home city of Melbourne. As the 2019 Formula Renault Eurocup champion before taking 2020 F3 and 2021 F2 titles Piastri is a really hot young talent, patiently waiting for his chance to step up to the world’s leading motorsport category, F1, as soon as an opportunity arises with Alpine or elsewhere. Meanwhile, Williams’ Thai-British racer Alex Albon had arrived down under with a three-place grid penalty in his luggage after making contact with Lance Stroll’s Aston Martin during the previous race in Saudi Arabia. Also, the Banbury based Haas team was hoping that its drivers would stay out of trouble as it did not have a spare third chassis available in Melbourne following Mick Schumacher’s high speed accident during qualifying in Saudi Arabia. 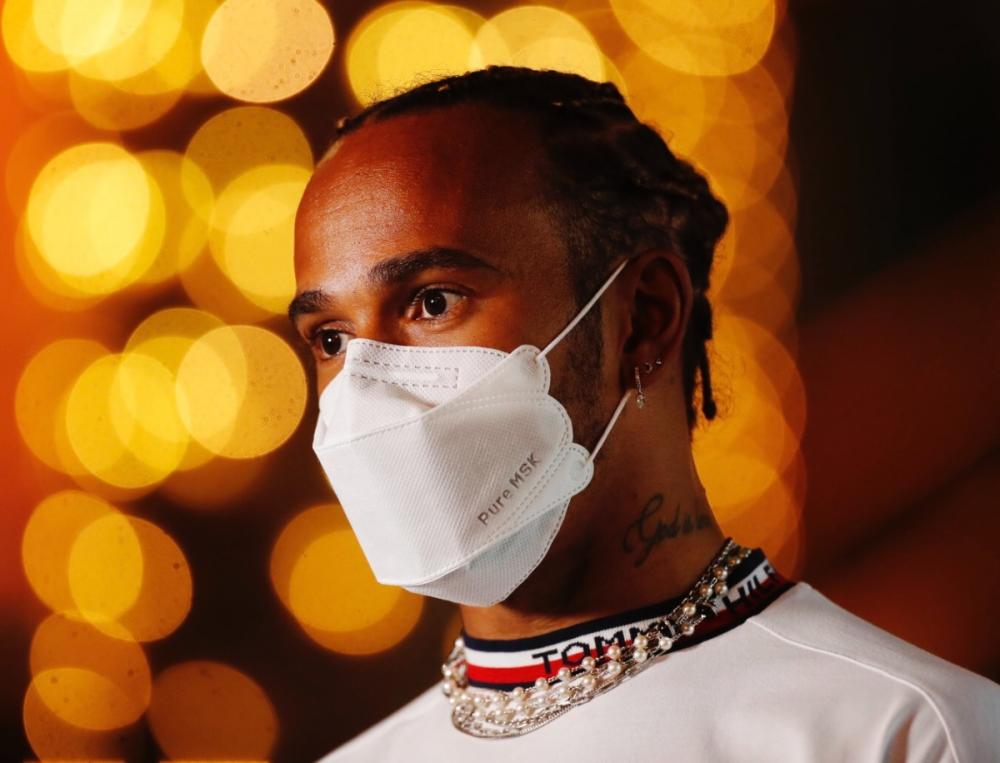 Drivers were reminded about the longstanding safety ban on any body piercings or neck chains being worn ontrack
Ahead of the event the FIA Race Director Niels Wittich had reminded all drivers that the wearing of jewellery in the form of body piercings or neck chains during all ontrack sessions is banned and has been since 2005 on safety grounds. Sir Lewis Hamilton has long been the most high profile driver who often wears such items, but it was stressed that the reminder about the rule was not aimed at him alone. Wittich was keen to avoid any driver potentially suffering any additional and unnecessary injury in the event of a major accident, such as Romain Grosjean’s fiery and life-threatening incident during Bahrain‘s Sakhir Grand Prix back in late 2020. With checks on drivers possible throughout the three days in Melbourne, it was expected that any breach of this regulation would result in a fine rather than a sporting penalty re grid place or time, although Hamilton was clearly still ignoring the regulation as he put on his balaclava and helmet on the grid just before the start of today’s race. This all then went a stage further on Friday when Wittich also advised drivers that there would be a forthcoming clampdown on the underwear worn whilst ontrack. No, this wasn’t an April Fools Day prank, but a genuine attempt to make drivers wear the fireproof underwear required by the regulations. The threat of future spot checks and other issues led to the usual Friday drivers’ briefing with the Race Director becoming an entertaining two hour affair!

Lastly on the news front, discussions still continue about where a Grand Prix will be held in late September to replace the cancelled Russian one. Qatar was initially the favourite, but it now seems perhaps more likely that a doubleheader might be held in Singapore.

There was drama on only the second lap when Sainz, whom Ferrari had started on hard specification tyres, lost control at Turn 10...
In Friday’s opening free practice session Carlos Sainz had led a Ferrari one-two with Leclerc ahead of the Red Bulls of Sergio Pérez and Verstappen, with the Mercedes duo still off the pace. Red flags flew twice, firstly when Pérez’s car had dropped some debris after hitting the exit kerbs at the final corner and then when Vettel’s Aston Martin had ground to a halt at Turn 10 due to a smoky power unit issue. The German driver subsequently received a 5000 Euro fine from the FIA for re-entering the track within five minutes of the end of the session without permission. Vettel explained that a marshal had told him it would be fine to use his scooter for a leisurely ride around the remaining part of the circuit back to the pits whilst waving to the fans, but the lack of approval from Race Control meant the fine still stood. He subsequently labelled it “a joke”, with clear sympathy from F1’s owners. 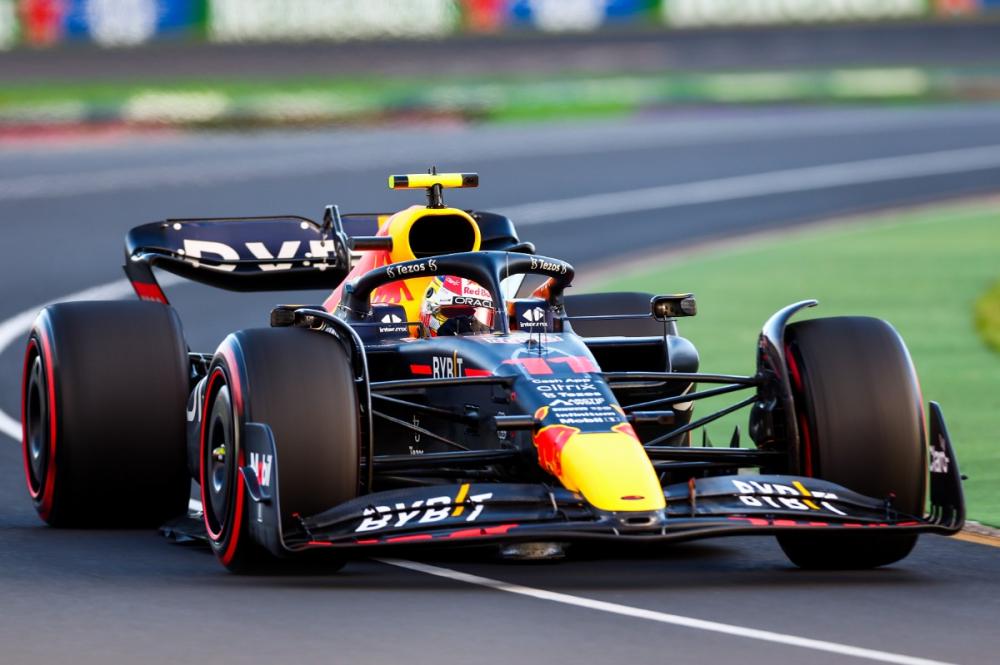 Red Bull’s Sergio Pérez was the runner-up following Verstappen’s retirement
Later on Friday Leclerc went fastest in the second practice period ahead of Verstappen, Sainz and Alpine’s Fernando Alonso, whereas George Russell was only 11th quickest for Mercedes and Hamilton 13th. Vettel’s earlier engine woes meant he missed the whole session and red flags again temporarily disrupted the action after part of a wheel cover fairing on Stroll’s Aston Martin was left ontrack at Turn 12. Come yesterday’s final free practice session it was McLaren’s Lando Norris who topped the timesheets, giving the Woking based team a welcome boost after a difficult start to the season, although their British rising star was helped by the timing of further red flags caused by Stroll who crashed at Turn 11 with just five minutes remaining. Earlier Vettel had had his own accident in the other Aston Martin, having lost control of the rear of his AMR22 at the previous corner.

There was a great atmosphere at the sunny, if windy Albert Park track as the start of the Grand Prix neared, with plenty of support amongst the sell-out massed crowd for the Ferraris and of course Australia’s Danny Ricciardo. The latter’s team-mate Norris was understandably very popular too, as he seems to be everywhere F1 goes. Over 419,000 fans visited over the three days, making it the best attended sporting event ever in Australian history. 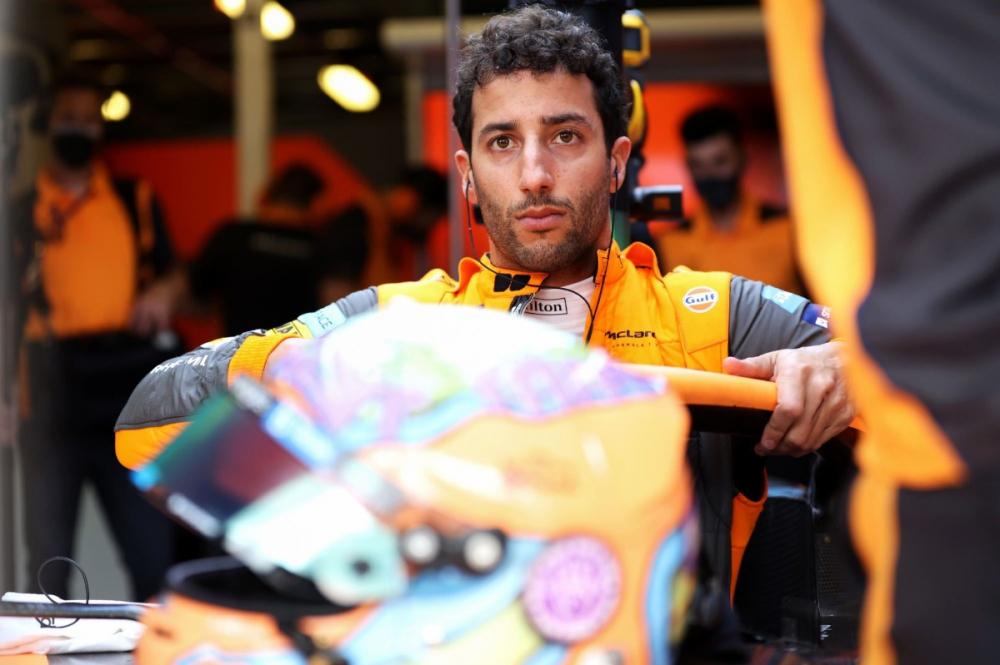 Local hero Daniel Ricciardo finished sixth for McLaren behind team-mate Lando Norris
After the national anthem it was time for things to get serious and come 3pm local time those red lights went out, with Hamilton quickly moving up to third behind Leclerc and Verstappen. There was drama on only the second lap when Sainz, whom Ferrari had started on hard specification tyres, lost control at Turn 10 and ended up beached in the gravel and out of the race. The Safety Car was called into action after an initial Virtual Safety Car period to enable the stricken car to be removed and racing resumed at the start of the seventh tour.

Three laps later Pérez swept past Hamilton at Turn 3 to regain third position behind Leclerc and Verstappen before the young Monégasque charger started to extend his lead out front. Verstappen was the first of the frontrunners to pit, his lap 19 stop to switch from medium to hard tyres precipitating a flurry of similar moves by most of the leading contenders. Four tours later the Safety Car again had to be deployed after Vettel completed his awful weekend by hitting the barriers at Turn 4 and stopping ontrack one corner later. Hamilton had already pitted, but Mercedes now took the opportunity to bring Russell in under the SC conditions, making the time loss less and moving the promising young British star upto third place.

The Grand Prix resumed on lap 27, with Leclerc making the race increasingly his own ahead of Verstappen, Russell and Pérez. The Mexican soon moved upto third before there was further high drama as Red Bull’s team leader ground to a halt with 19 tours remaining, a power unit issue again forcing him out of a race. Following a brief VSC period Russell was again back in third place behind Leclerc and Pérez and so it remained to the chequered flag, with the 24 year old from King’s Lynn taking his first podium finish for Mercedes. Fourth place for Hamilton gave Mercedes a strong team result and McLaren was equally happy with Norris and Ricciardo completing the top six finishers. The dominant Leclerc also helped himself to the extra point for the fastest lap of the race on his final circulation.

Mercedes’ third placed George Russell was delighted to be back racing in Australia
In a fortnight’s time comes the Emilia Romagna Grand Prix and the first of three additional Sprint races this year, with the iconic Imola circuit in north eastern Italy the venue. This old school track is one of my favourite F1 destinations, if where we sadly lost Ayrton Senna back in May 1994, and it will be fascinating to see where this already exciting season leads us next. Ferrari’s iconic Prancing Horse is flying high in the hands of Leclerc, whilst Verstappen will be praying for better reliability from his recalcitrant Red Bull and Russell will be hoping for more podium successes for Mercedes.