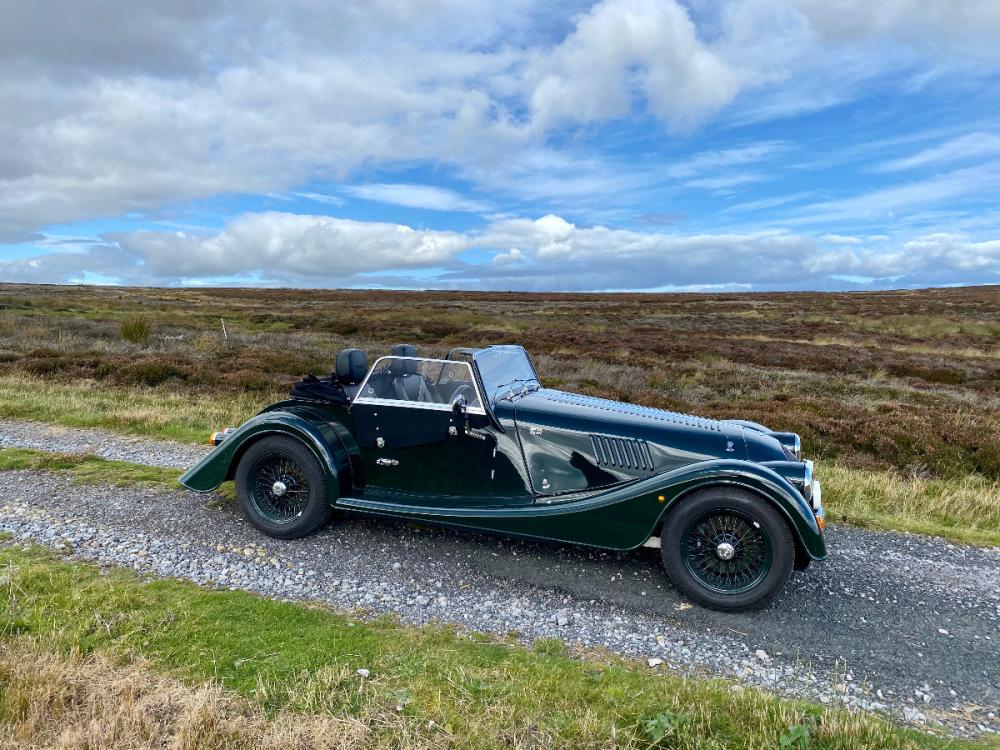 I have been lucky enough to drive an enormous variety of vehicles in my long and varied driving career. However, I had never driven a Morgan. I rather carelessly ignored kind invitations to visit the factory and test drive a car or two. How remiss of me!

The situation was remedied last month when the good folk at Malvern offered to deliver a car to my door. How could I refuse?

All too soon a Land Rover and covered trailer appeared at the bottom of my driveway and I must confess to being rather excited as the green Plus Four emerged into the daylight, mine for a week.

A few Morgan lessons were required prior to the final handover, the cars being quite unlike anything else on the market today. 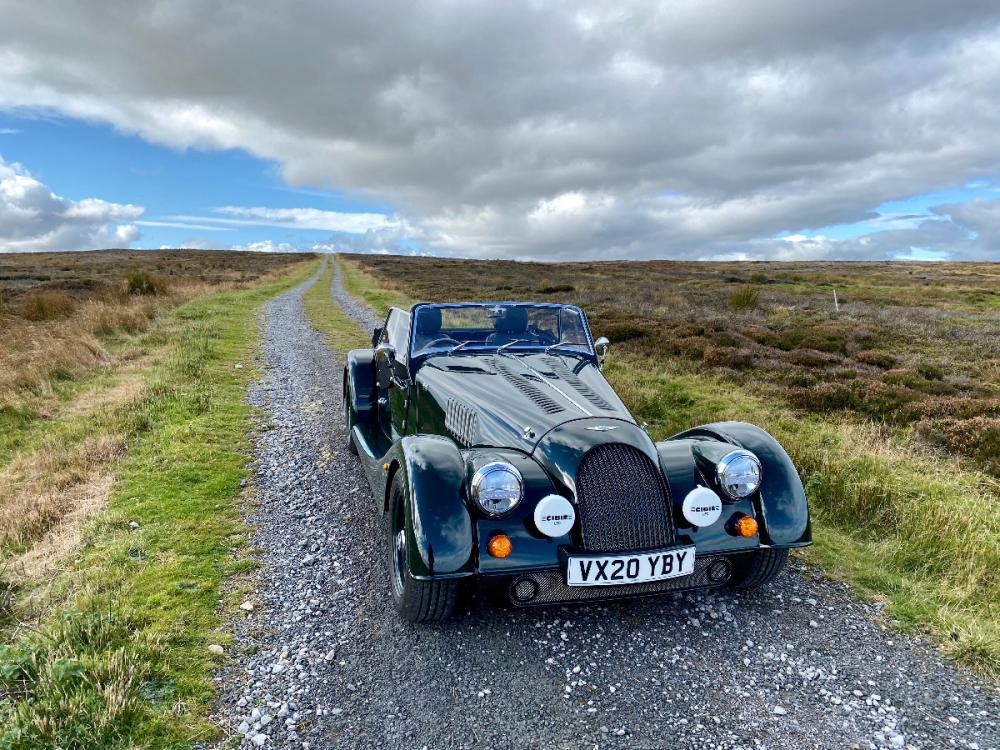 The Plus Four still retains the traditional Morgan look, yet has undergone a recent modernisation programme, the aim being to broaden the car’s appeal and perhaps attract an affluent younger audience.

Under the distinctive louvred bonnet now sits a powerhouse of an engine, kindly supplied by BMW. The turbocharged 2.0-litre lump produces a heady 255bhp and in a car weighing just over 1,000kg, the performance is breath-taking. The 0-62mph sprint time of just 5.2 seconds gives some indication of the car’s acceleration and then there is the top speed of 149mph, for the brave.

My test car came equipped with a slick 6-speed manual gearbox, though you can specify an automatic. It is even quicker still and may suit a more city-based driver. 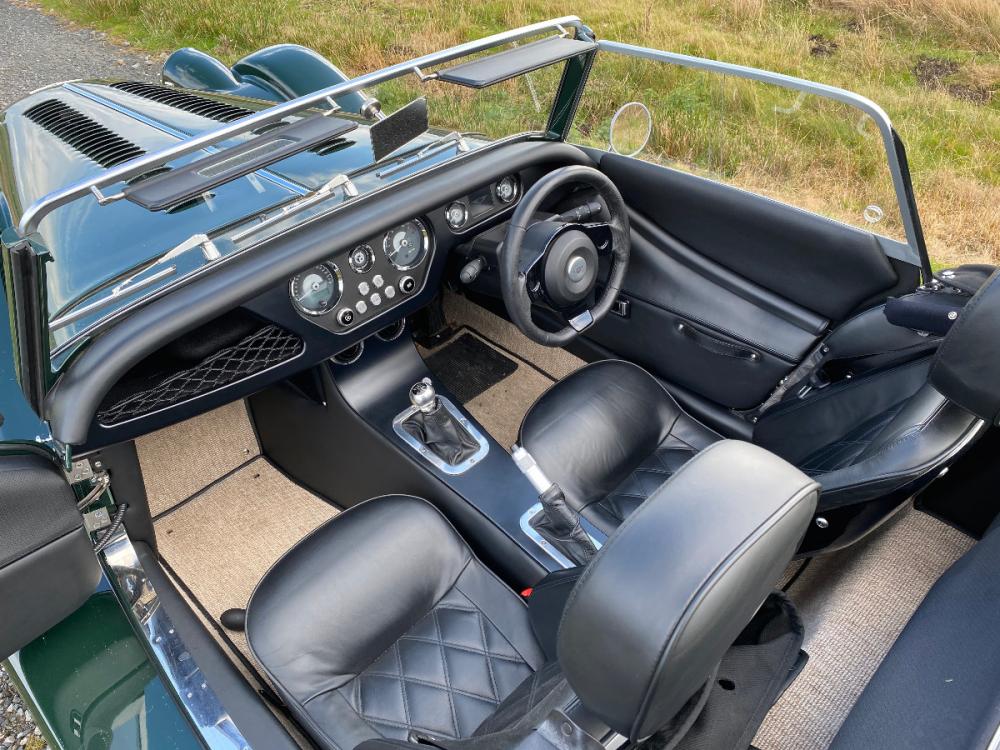 Other modern touches include air conditioning, heated seats and the ability to connect your smartphone to the built-in speakers. I am not sure any of these are strictly necessary. Drop the roof, wear a sensible coat and listen to the engine…

Day 2 with the Morgan saw an empty diary, so a chance to play. I set off after breakfast into the Dales, with no particular place in mind. The weather was fair, the roads were empty, the roof was down, and all was right with the world.

I removed the side screens for the full open-air effect, but the autumn chill soon saw them being reinstated. Lovely on a warm summer’s day no doubt. The heater, powerful in itself, seemed only capable of warming my left hand and foot and as for the heated seats, I did wonder if there was a loose connection as I could not detect any warming effect.

I paused to fuel both car and driver in the delightful market town of Masham and once replenished we pressed on into Weardale, retracing an exciting driving route that I had covered a few weeks earlier in a Porsche Panamera Turbo.

I suspect I was quicker across the moors and if I wasn’t, it certainly felt that way. Sitting so close to the ground rather magnifies the sensation of speed and there is an immediacy to the car’s controls, now so lacking in most modern cars. 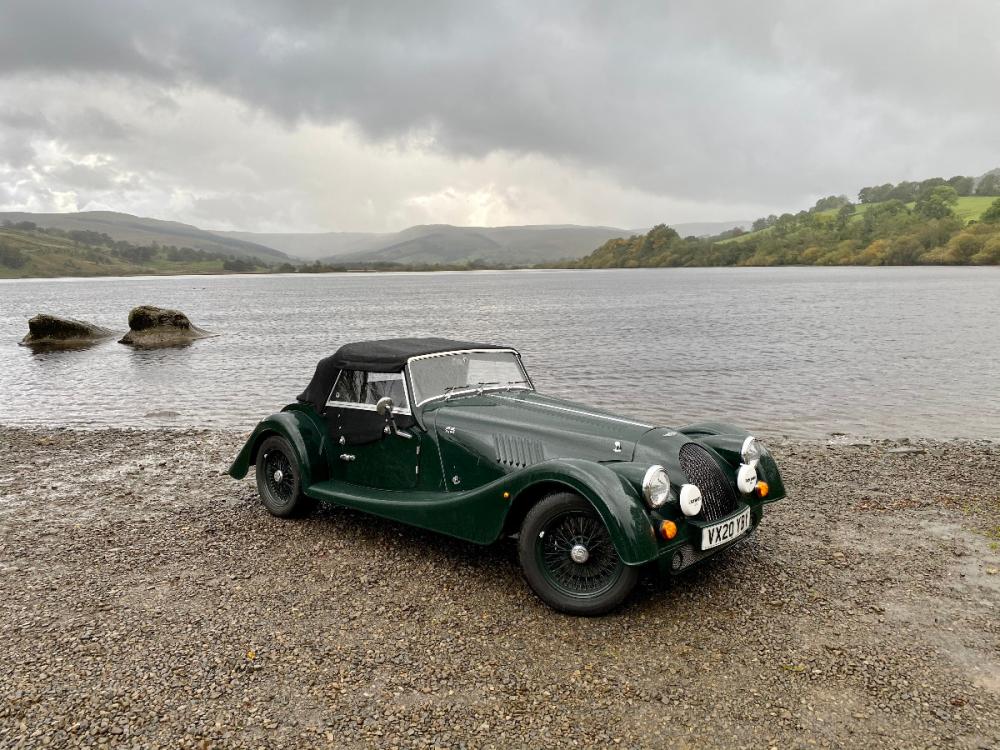 You feel connected to the Plus Four, the steering an extension of your arms, the slightest movement having a direct impact on the direction of travel.

Morgan has also put some of its energy into softening the ride and although still on the firm side, at no time was it uncomfortable. You are always aware of what is going on under the wheels and that just adds to the experience.

Push hard into a corner and there is scant body roll and even when the heavens opened, grip was plentiful, and the car gave me no cause for concern.

Let me now pause to consider the German-sourced engine, now powering that most British of cars. I have already mentioned the surfeit of power, but also worth mentioning is the engine’s tractability. I developed a soft spot for third gear, which was happy to pull strongly from as little as 15mph. Let me just say it was still pulling strongly once the UK speed limit was comfortably exceeded! 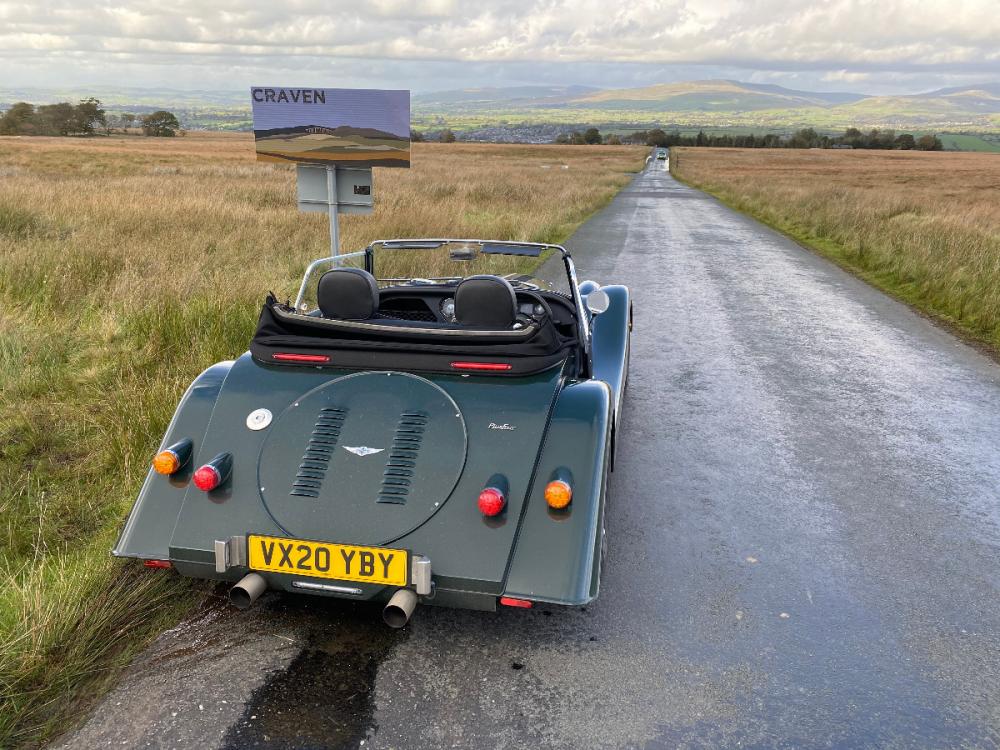 Fifth and sixth gears seemed almost academic and I suspect would only be required if settled at a motorway cruise.

There is also a rather enticing ‘sport’ button and once pressed the throttle response is sharper, the Plus Four feeling even more eager to gobble up the tarmac. As an accompaniment, the exhaust now pops and bangs, lovely for a while but a tad tiring in what is a noisy car anyway.

I returned home in the early evening having spent the whole day behind the wheel. Tired… yes! Windswept…. yes! Exhilarated… undoubtedly!

This was to be the pattern for the rest of my time with the Morgan. Any excuse to pop out for a drive and even in the wet, there was fun to be had.

I would not recommend getting caught out by a sudden shower as there is no electric roof to save you from a drenching. Instead there are poppers to be popped and awkward latches to be engaged. Practice makes perfect…
Almost watertight, expect a few drops of water to find their way into the cabin in the heaviest of rain and rejoice in the heated front screen which is vital in ensuring some forward vision.

Other than the hood, there are other Morgan foibles to deal with. The seats are a little on the narrow side. I only just fitted in, though legroom is plentiful. 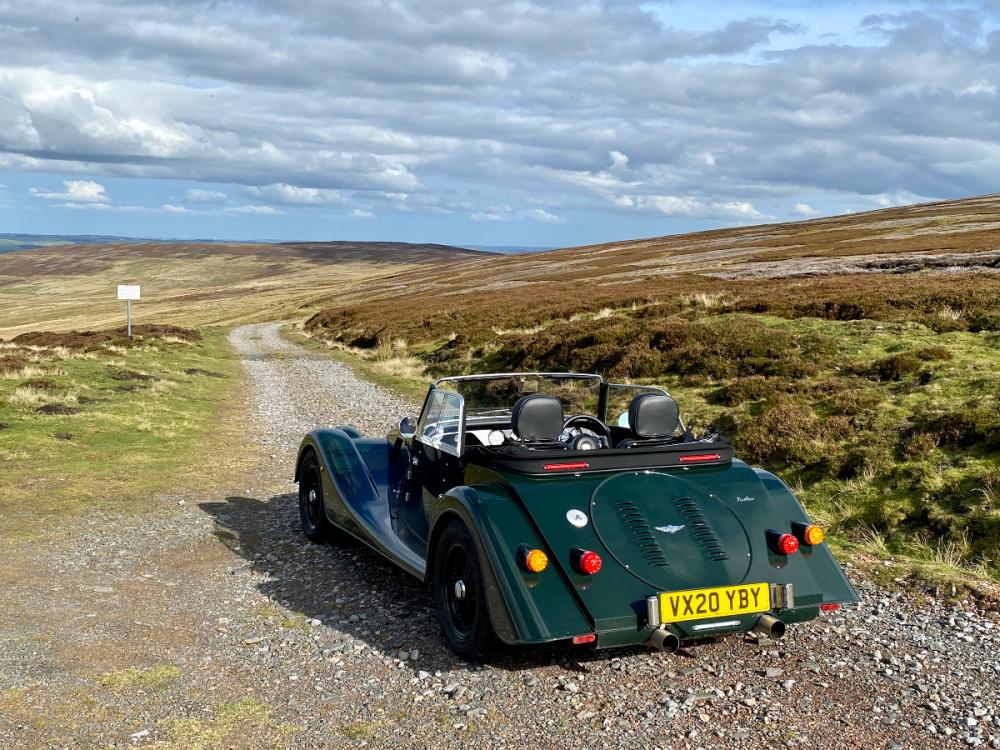 With the hood erect, closing the doors requires a hand through the window to ensure the side screen locates correctly. You soon get into the swing of it…

The fuel tank is rather small, so expect frequent yet inexpensive fill ups and the claimed 39mpg for the combined cycle is a little optimistic if you want to have fun. I would say 30mpg is a little more like it.

Luggage space is limited to a modest space behind the seats, so I would recommend the optional luggage rack (£510 to £630).

So, would any of this put me off Plus Four ownership? Absolutely not as I had so much fun behind the wheel. If I were lucky enough to be an owner, I would happily drive the Morgan every day, knowing full well that each drive would feel like an adventure.

Perhaps when I retire, I will buy an old Morgan and become that eccentric old chap seen out and about in all weathers, roof down of course. It is an appealing prospect and there is no harm in dreaming. 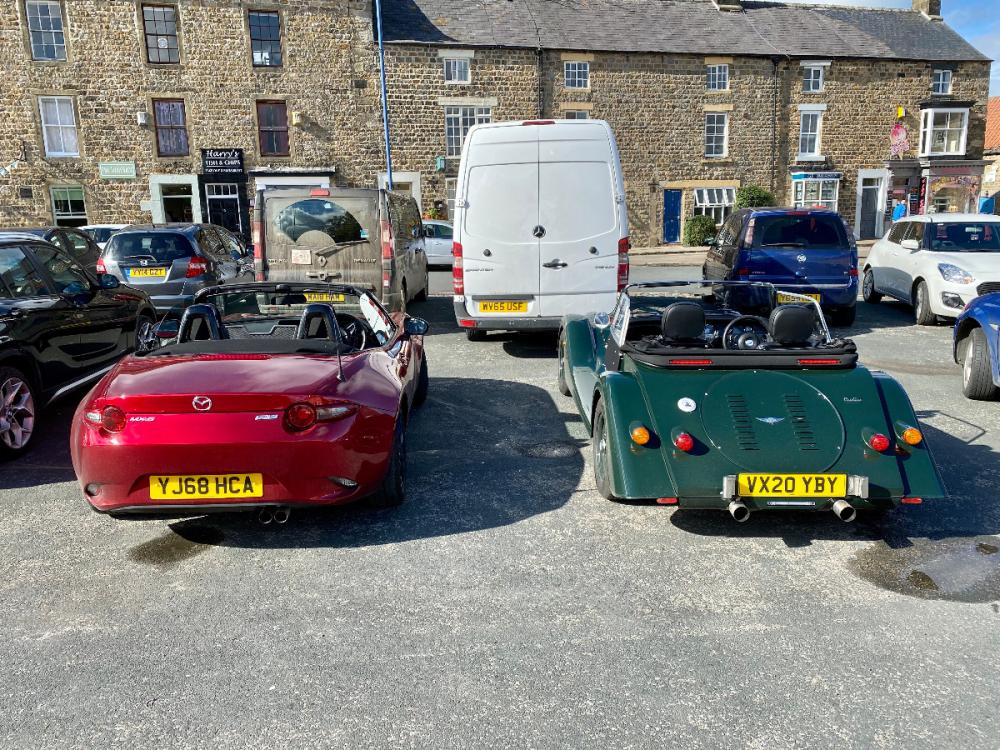 Variations on a theme. MX5 meets Morgan
So, if you fancy some good old-fashioned driving pleasure, pop along down to your nearest Morgan dealer and take a drive on the wild side. You will be glad you did.