The words legendary and iconic are often much overused these days, but both truly apply to Sir Frank Williams and his Formula 1 motor racing team following his death today aged 79. 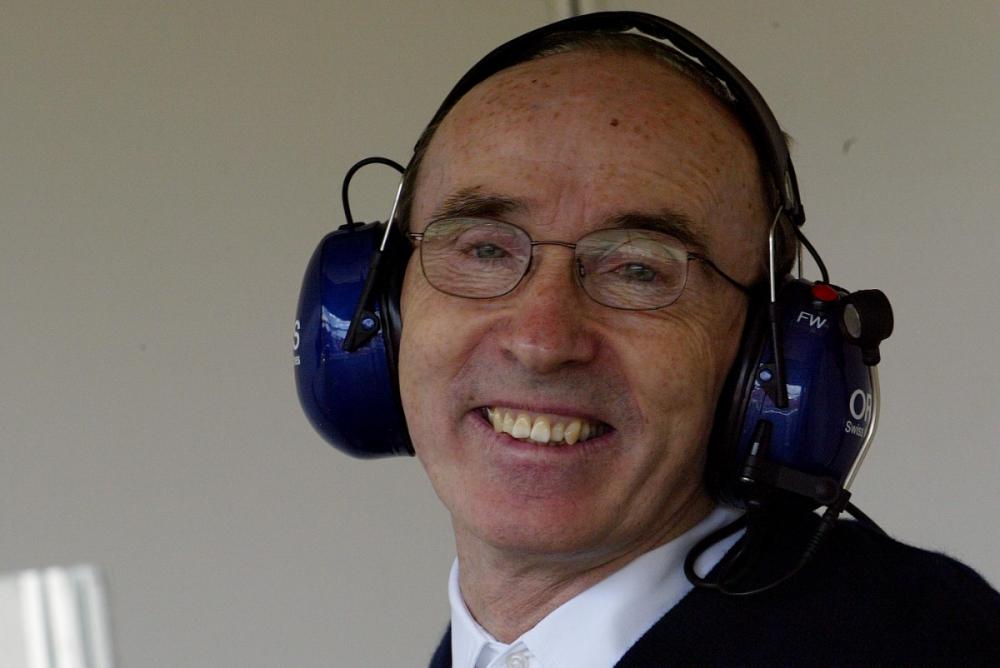 Sir Frank Williams, who died peacefully this morning
The very first time I attended a Formula 1 Grand Prix in person rather than just watching the sport on television was back in the summer of 1992 when I saw Nigel Mansell thrill a massive Silverstone crowd in his dominant Williams car as he headed towards his sole F1 World Championship. This was the Williams team which ended up achieving 114 F1 victories, seven Drivers’ titles and nine Constructors ones.

Sir Frank was a true legend and icon of our sport. His passing marks the end of an era for our team and for the sport of F1.
Sir Frank became a household name as a longtime Formula 1 team owner and team principal synonymous with on track success, but he also showed true determination in the face of being a tetraplegic since 1986 and then suffering from the loss of his wife Lady Virginia back in 2013 after being together for over 40 years. He had been awarded a CBE in 1987 and was knighted 12 years later. Before the death of Ginny Sir Frank had already recognised the need to seek help in running the team and in 2012 he remained as team principal, but handed over the real leadership of the outfit to his daughter Claire. The family’s involvement was subsequently to end in September 2020 after the team had been sold to the US based Dorilton Capital. 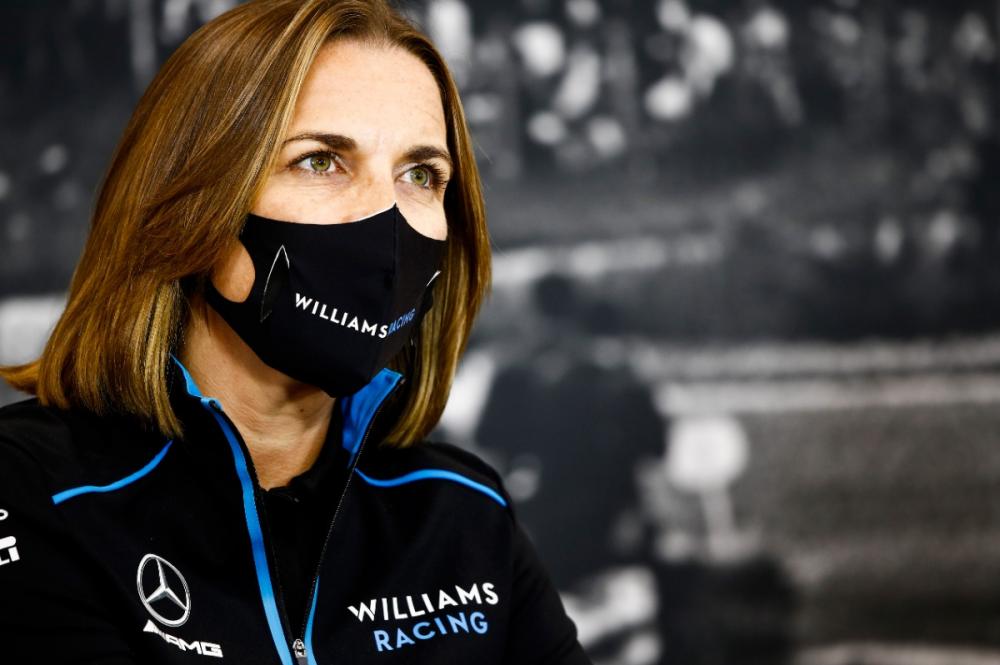 Frank’s daughter Claire took over the day-to-day running of the team in 2012
A young Frank Williams had left school aged just 17, determined to become a racing driver, and his ontrack career began a couple of years later. He was often in a precarious state financially, but by 1964 he was sharing a Brabham Formula 3 car with “Bubbles” Horsley. Soon though he realised that he might be more successful as a team owner and formed Frank Williams Racing Cars. In 1977 Frank joined forces with a young engineer called Patrick Head to create Williams Grand Prix Engineering, running an old March F1 car. Buoyed by money from Saudia Airlines, they produced their own car for the following season with the gritty Australian Alan Jones behind the wheel. The team then notched up its first ever F1 victory at Silverstone in 1979 in the hands of the Swiss driver Clay Regazzoni.

The following year Jones became Williams’ first ever world champion and Keke Rosberg and Nelson Piquet subsequently did likewise in 1982 and 1987 respectively. However, it was in March 1986 when Frank crashed his hire car whilst sprinting to catch a plane home after a test at the Paul Ricard circuit in southern France and was paralysed and confinded to a wheelchair from that moment onwards for the rest of his life. 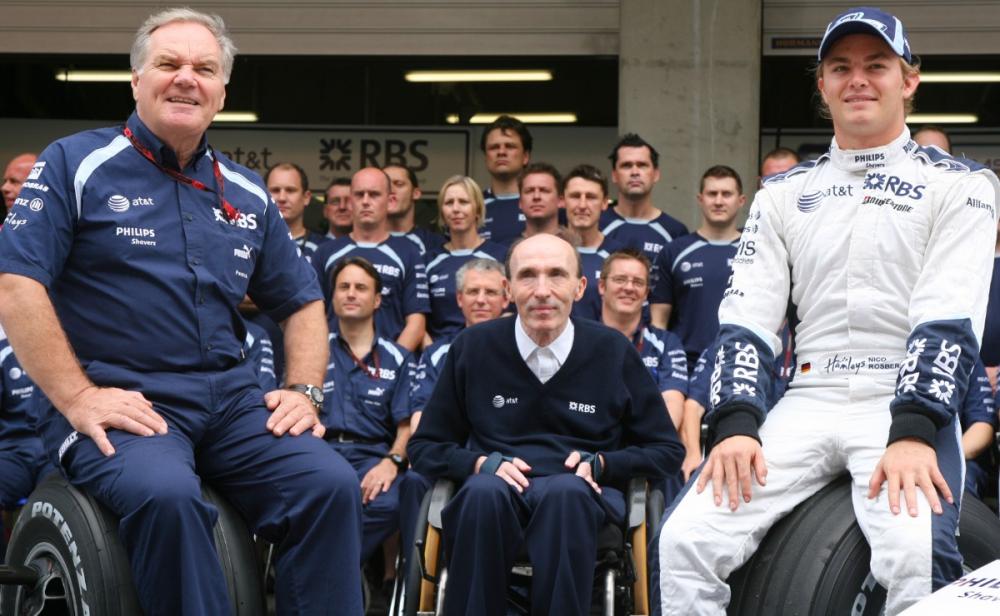 Sir Patrick Head (left), Sir Frank (centre) and driver Nico Rosberg (right)
Frank showed true guts and determination though as he fought to overcome his severe disabilities and in 1992 he witnessed Mansell winning a further world championship for his team, with Alain Prost doing likewise a year later. The whole outfit then had to suffer the pain and turmoil following the death of its lead driver Ayrton Senna at Imola on 1 May 1994, but more success was to follow in 1996 and 1997 when Damon Hill and Jacques Villeneuve claimed the Drivers’ titles.

The famous team was to continue racing in Formula 1, but the heady days of success were no more and a gradual decline set in, although in more recent times there have been early signs of a resurgence to take the outfit back towards the front of the grid where it so belongs.

A statement today on behalf of the team summarised so well the thoughts of so many of us: “Sir Frank was a true legend and icon of our sport. His passing marks the end of an era for our team and for the sport of F1.” Amen. Rest in peace, Frank, alongside Ginny again. 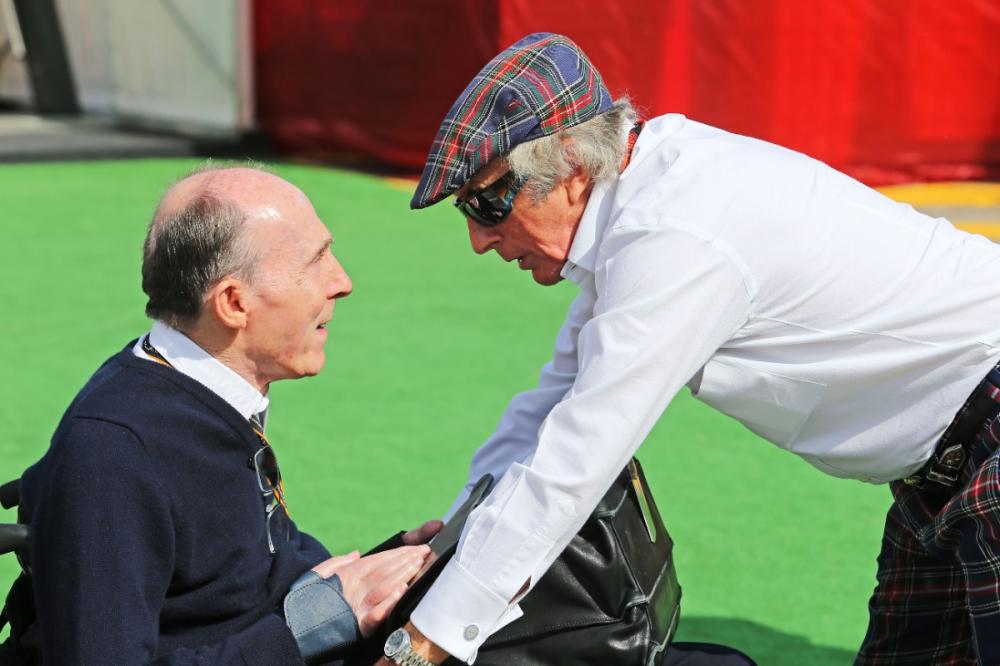 Two F1 legends together - Sir Frank and Sir Jackie Stewart compare notes
Also by Graham Read...
﻿Verstappen Officially Crowned As Mercedes Withdraws Intention To Appeal﻿The Aftermath Of Abu DhabiVerstappen On Top Of The World In Abu DhabiF1 The Loser After Chaotic Hamilton Victory In Saudi ArabiaHamilton Reduces The Gap To Verstappen To 8 Points