Poem Of The Week: Wheel By Stephen Dee

The well-kept gardens this side of town,
rose mounted borders, cornflowered, lilac-laden
around the back of the old stone primary (boys
chiseled above one entrance, girls chiseled
above the other) have never looked more

dishevelled. Lowcloud, bulbous, dark as tripes
eases itself across the sky. Underfoot
the muscular cobbles, tyretread tattoos
displayed on slick, moistened skin, channel
drizzle where it gathers and begins to roll

toward the valley floor. Over at Bob Crossley's
the light, polished to silver in his workshop
window, clings to the frontage like paint and
in the yard his skip rusts the milky puddles;
turpentine rainbows stretch from a fallen tin.

Scalpings, left in a pile in a quiet corner by
a break in the hedge that the postman uses,
glisten darkly in the drifting damp like half
chewed cinder-toffee. There the world falls away
through layers of privet and hawthorn

into the ginnels, into the muddy footpaths where,
slotted in the toe of the railway siding,
allotments turn the murk and mizzle of midsummer
into lucent tapestries. Sweetpeas writhe like
restless needlework. Tomatoes bulge under glass,

torn deckchairs lean half-collapsed in shed doorways,
willow herb dandles along the bankings above,
fluffy ejaculate sprayed across corrugated roofs.
Rifleman Dean Saunders stands his leg against
the pellet-pitted picket fence he used to use as 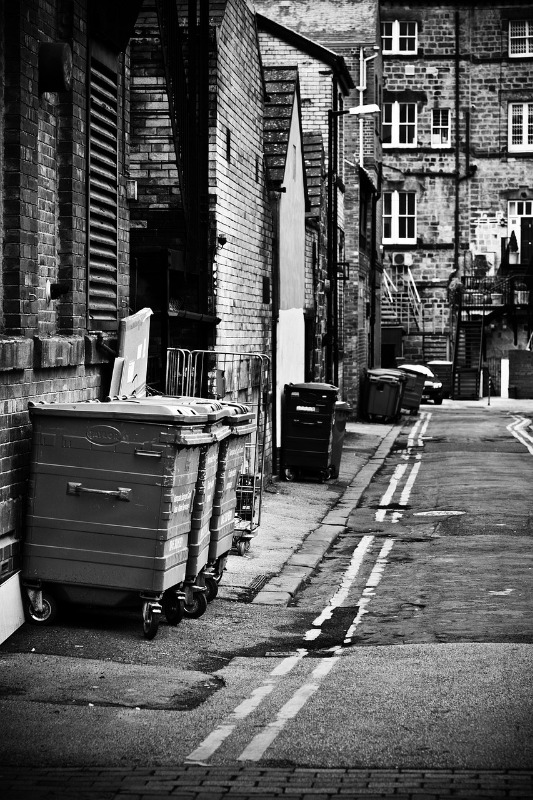 Image by PublicDomainPictures from Pixabay
Mood, in Stephen Dee’s richly seamed poem, is described in the terms of a landscape’s leavings. Neither dead nor assuredly alive, the detritus of suburban decline is everywhere counterpointed by its converse: the torn and half-collapsed deckchairs, stray dog, and milky water’s ‘turpentine rainbows’ suggest an agency of corruption and decay, whilst, elsewhere, the relentless ‘ejaculate’ of willow herb, and the bulging tomatoes, insinuate a sense of fecundity and pregnancy of purpose into the tableau.

The narrator is detached, acutely observant, cleansing his narrative of any affiliation beyond the particulars of location. His approach is easeful, meandering, yet alert to diversion: the languid delivery is slowed by reflective curiosity to the stroll of an intuitive flâneur. Dee’s use of compound words, variations of metrical pace and strikingly original use of metaphor and simile, somehow authenticates the objects of his contemplation, invests them with a life above and beyond the backyard quotidian. The ‘restless needlework’ of sweetpeas are a persuasive microcosm of the neat ‘tapestry’ of allotments rendered ‘lucent’ in the alliterative flourish of a midsummer’s ‘murk and mizzle’.

Rifleman Dean Saunders, too, is neither dead nor assuredly alive: a figure on the margins whose synaesthesia is encouraged by remote experience, but finds an outlet for repose in a place where vegetables grow. Dwelling in the past, animated by the variegated but telling smells of memory, of Afghanistan, of fuel and of antiseptic cream, Saunders endures at several psychological removes from the ground he inhabits, yet remains an indivisible part of its productive fabric. A contrast to the robust and ‘muscular’ cobbles in whose runnels history flows, the narrator himself is a visitant, as tangential to the drama of existence, but as sensitive to its deformity, as Douglas Dunn in a Hull of the imagination.
Also by Steve Whitaker...
Poem of the Week: Last Illness By Ian Hamilton (1938-2001)Poem Of The Week: For M., In England By Matt BroomfieldThe Swamp Ghosts Of Pripyat: Stalking The Atomic City By Markiyan KamyshThe Endless Opportunity Of Words: Lanyard By Peter SansomPoem Of The Week: The London Dinner Party By Jayne Joso