Good Riddance, But Now What? 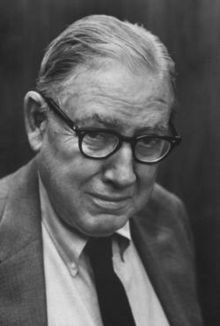 Ogden Nash
Perhaps a bit of light humour is the best antidote to what the monarch once referred to as an ‘annus horribilis’. And in American light verse exponent Ogden Nash’s slight octave we find a gimlet-eyed view of a succeeding year shaped by earnest experience of the one about to expire. We all recognise the tone, as we all recognise the failure of reality to approximate to the promise pealed in the hollow bells of New Year’s Eve. That some good will mostly come of it is a sentiment embodied in the poet’s good temper, for ‘Good Riddance’ is a poem with heart, in spite of the gallows codicil.


Also by Steve Whitaker...
Poem Of The Week: 'Sonnet 29' By William ShakespeareReview: Ings Strings At Art In The Dale, Kirkby MalhamPoem Of The Week: 'This train has left the city ...' by Paul HenryAlbum Review: Staring At The Sun: Talking About X By JARRPoem Of The Week: 'Giorno Dei Morti' By D. H. Lawrence (1885-1930)
But in the image of the clock ‘crouching, dark and small, / Like a time bomb in the hall’ is an oblique reminder of another whose hands count inexorably down to the flatline of midnight. The double-edged ‘burst’ of excitement, of renewal and becoming, carries, always the possibility of its opposite: the Doomsday Clock is set currently at one minute and forty seconds to extinction.

It doesn’t do to dwell, as Nash might have added. A happy new year to all our readers !