Poem Of The Week: 'Hunt' By Róisin Tierney

Say, as the springbok twists, say as it turns
In contradictory prongs above the veld,

say as it turns and twists, say as the sun
burns the black earth and turns it into dust,

say as the hooves electrify the air
and tap the dust upwards in spiral twists,

so turns the earth, so turns the yellow sun,
so hefts the huntsman to his blue-barreled gun

which warps the air, which twines its double stripes
into a helix, a paroxysm, delight,

that swerves to catch the bullet with its heart,
shatter the sky, and tear the world apart. 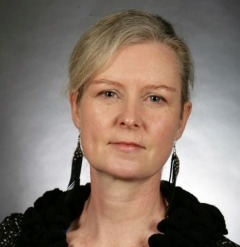 Róisin Tierney, Image by Arc Publications
The sustained geometry of Róisin Tierney’s delicately balanced poem is deliberately undermined by a dichotomy: the serpentine turning and twisting which figuratively unite an arid landscape, velocitous action, and a terminal dance of interlocking intentions, is shattered as a bullet rips through the heart of a springbok.

If Tierney’s use of more or less regular iambics, full rhyme and persuasive assonance facilitate and control the flight of the animal, then the essence of its existence is captured in the aesthetic focus of her observation: an energised atom in a nucleus, the antelope’s inherent vitality is captured as though swift instinctive impulses were the measurement of freedom.

The poet’s seemingly limitless capacity to describe a charged moment is astonishing – the prongs of slender legs, and electrifying hooves kicking up dust in ‘spiral twists’ are counterpointed, without a change of tonal gear, by the quick uplift of a gun, whose directed blue-steel barrel will foreshorten perspective.

Tierney’s mantra is brought to a close as the sublime whirl of the dervish/springbok’s paroxysmic ‘delight’ finds denouement. There is an inevitability to its demise as it turns its body to face the weapon, but this small African death carries a symbolic resonance: the rending of the sky, and the tearing of the world by the rifle’s report presage climate crises and species extinction.


‘Hunt’ is taken from The Spanish-Italian Border and is reproduced here with the kind permission of Arc Publications.

More information here: https://www.arcpublications.co.uk/books/roisin-tierney-the-spanish-italian-border-512
Also by Steve Whitaker...
Poem of the Week: Last Illness By Ian Hamilton (1938-2001)Poem Of The Week: For M., In England By Matt BroomfieldThe Swamp Ghosts Of Pripyat: Stalking The Atomic City By Markiyan KamyshThe Endless Opportunity Of Words: Lanyard By Peter SansomPoem Of The Week: Wheel By Stephen Dee