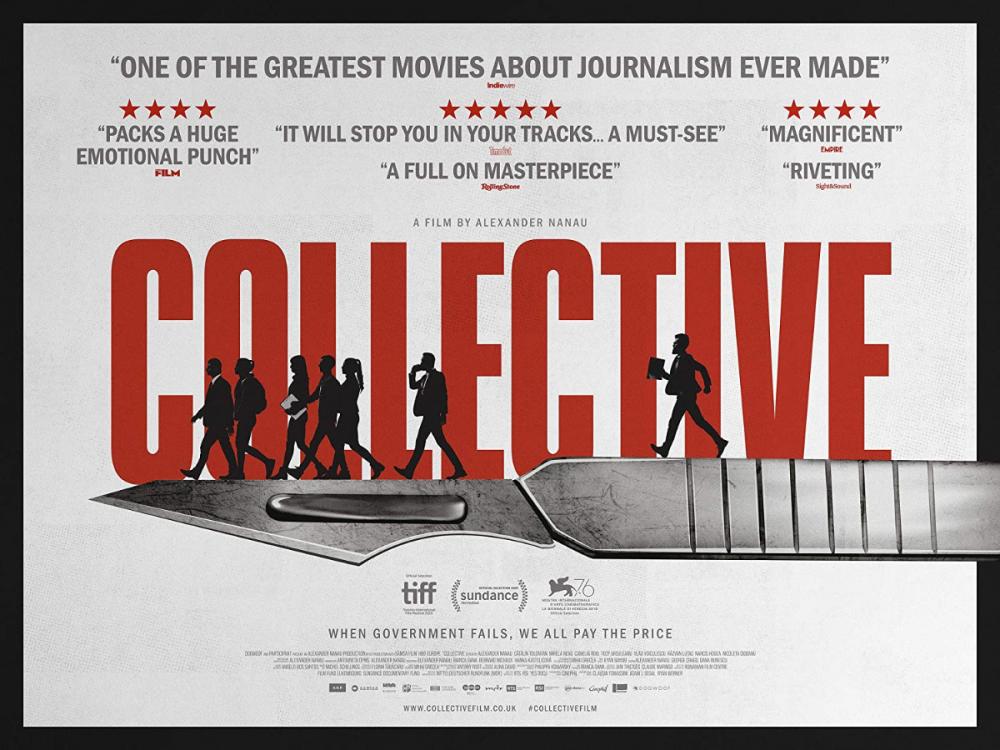 Late last year Alexander Nanau’s fearless Romanian documentary Collective (or Colectiv) was released in the UK, and since that point, the film has built up a real buzz and been one of those documentary features that feels like a force for change and desperate call to action and attention.

More so now that the film is up for two Academy Awards this Sunday at the 93rd Academy Awards (up for not only Best Documentary Feature but also Best International Feature), and you can now watch this eye-opening film for yourself via the BBC iPlayer, where it was released under their Storyville banner, entitled Collective: Unravelling a Scandal, and also has screened over at BBC4.

The film shows the devastating impact of a raging fire that broke out in the Bucharest nightclub Collectiv on October 2015, which killed 27 people and injured 180 more. Though the aftermath would prove equally as harrowing, as the event laid bare the lies, deceptions and corruption rife in the medical industry and Romanian government, and one tireless group of journalists would not look away from this terrible truth and demanded the people know the facts.


Also by Jack Bottomley...
Review: The Mitchells vs. The MachinesReview: Promising Young WomanReview: Thunder ForceReview: Godzilla Vs. KongReview: The Dissident
Collective is a very hard hitting and important story about how this one tragedy came to expose the heartbreaking depth of institutional and medical corruption running rampant in Romania, and how the systems in place to protect people were rotten beyond belief, and the public were doomed to suffer such cruelty and loss. Its accolades and acclaim are both richly deserved and important, as this is very much a must see piece of work, and a film bravely showing why true journalism is rare but vital, and how fighting corruption is not a short battle but a gruelling and overpowering war.

We spend time with the journalists as their investigation delves deeper and deeper, and the dark web of horrors spans outwards to jaw-dropping degrees, but we also follow the efforts of a new well meaning Minister of Health, whose disillusionment in the face of such greed and evil by the ruling powers and in the deadly effects of their deceit, is truly infectious to us as viewers. As an audience it is nigh on impossible not to be sickened by the lies surrounding diluted medical products or by the abuse of power or siphoning of vital funds, and as a human beings it is equally unthinkable (though maybe it shouldn’t be) that such suffering and death was not only allowed to occur but was met with true ambivalence by those trusted to look out for people’s best interests.

Truth be told, come the gut-punching resolution of the film there is a soul-crushing realisation that reality is truly broken, as immorality not only prevails here but is handed all the means they need to be able to do so by masses who continue to be lied to and manipulated. However, there is solace to be attained in the fact that people like these journalists, these victims that have used their pain to tell a powerful inspiring story or the handful of new generation politicians fighting an uphill battle, are there and no matter how hard or insurmountable the battle gets, they all keep on fighting.

The final image the film leaves you with anchors this final point, as well as showing the human costs of the wicked acts that were and continue to be committed. And it is a most powerful full stop to a shocking and frightening film that is absolutely essential.

I cannot recommend this heartfelt and passionate documentary enough. Incredible.