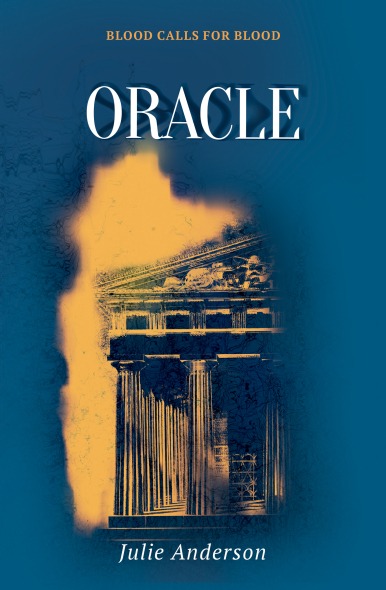 Last year I had the pleasure of reading Julie Anderson's Plague - a captivating story introducing readers to the sharp and shrewd protagonist, Cassandra Fortune, who, despite her name, seems rather prone to misfortune. The skilled writing of Anderson depicted a complex crime thriller, infused with politics, corruption and scandal. This May, in what the author herself describes as “the further adventures of Cassandra Fortune”, our protagonist returned for another gripping appearance, once again inadvertently becoming central to a murder investigation. Oracle brings you in to a world where nothing seems simple; the characters are vividly portrayed, their tense, pacy exchanges convey precisely the mood of the drama, and often, by dint of what they don’t say, the characteristics they perhaps would prefer to remain out of sight.

In Greek mythology, Cassandra was ‘a Trojan priestess of Apollo cursed to utter true prophecies, but never to be believed.’ The connection adds resonance to Cassie’s latest misadventure, set near the Temple of Apollo in Delphi, Greece. The temple sits in the shadow of Mount Parnassus, at the foot of which runs a spring, where, Cassie is told, The Pythia (the name given to the High Priestess of the Temple of Apollo, also serving as its Oracle) would “bathe there to achieve ritual purity before she made her prophecies.” It is said (although academics have challenged this) that the Priestess would deliver oracles in gibberish, and in a frenzied state. Cassie’s guide explains that this could be a result of the presence of ethane, methane and ethylene, producing “a form of wild mania.” Comparisons are sometimes drawn between these two female figures which adds context to the story into which the mythology is subtly imbued. Cassie’s more cynical response to her guide’s narration is “Basically, the Pythia was stoned. No wonder people thought she prophesied in riddles.” In a sentence, we hear Cassie’s cynicism, her preference for fact, and her blunt directness; she’s far too diplomatic to show rudeness.

In Oracle, Cassie has moved on from her previous role of besmirched civil servant and now she is a government employee, arriving in Greece for a conference to talk on tax reform, a personal envoy of no less a figure than the prime minister.

Arriving at the European Conference Centre, she is met with protestors and hurries to her hotel room. Swiftly the story sets its pace: we learn her true agenda for the trip and as she begins to relax, an argument suddenly erupts in the room adjoining her own. Late at night, she complains to hotel staff, but as the sounds cease, she retreats to her bed. 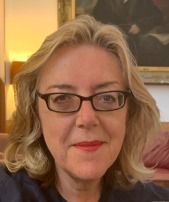 Julie Anderson
But that is just the beginning. The following day she meets with fellow conference attendees. All curious creatures, their dialogue to the point; they don’t waste time in small talk. You can almost sense the disdain some of them might reveal through their facial expressions. Of course, their first interactions are somewhat disjointed, rigid and disinterested – precisely what you might expect from a conference delegation. Some are likeable, but you suspect that each is there for their own gain, however carefully it is concealed. And like any good mystery, as you know from Anderson's first novel, no one is to be trusted.

Like Plague, the narrative reads like a carefully scripted screenplay, and captures what would be a tense and compelling crime drama. After a few days, a storm descends on the conference centre and the power cuts out – this is all after the small matter of two murders taking place. Those left at the centre are all suspects, and unfortunately no one can escape – the roads are blocked and once again, Cassie comes to the fore as a lead investigator in the murder inquiry. There are official police investigators, but Cassie’s instinctive competence allows her to slide easily into the role, whether she likes it or not.

The plot flows at a sustained pace, never slowing, never a dull moment. Beyond the fabulous dialogue, we have the beautiful landscape illustrated in words. We start to get inside the characters of the people who are so determined to keep their masks in place. Their eccentricities are illuminated in perfect light, their character flaws surfaced but with no criticism; Cassie is not one to judge. She herself remains wounded; she has not yet let go of the terror she experienced at the hands of Plague's bad guys. In the first novel, I didn't initially warm to her; I remember she even irritated me to some extent, but meeting her again, she does seem to have matured, perhaps developed more resilience. She seems more grounded here, albeit still fragile to a certain degree, but conversely empowered by the fear she felt before. She is the perfect level-headed persona to inject into a situation where in a moment everything could derail and crucially, she is able to detach herself from the melee. Selfishly, she has her mission, and her potential failure to complete the task she is undertaking on behalf of the PM is compromised by the murders. She needs to solve the case to maintain her own sense of credibility and deliver her objective to the prime minister.

The characters grow, develop and build as the plot strengthens its complexity and intrigue. All events are witnessed through the careful observation of Cassie; her own reserve perhaps brings her counterparts out of their shells and a tentative friendship is formed with the only person she can really trust, her translator. We witness a romance, jealousy, cultural clashes and misalignment, corruption and deceit - and a fitting calamity on a dark, stormy night.


Also by Caroline Spalding...
Review: You Let Me In by Camilla BruceReview: Lonely Castle In The Mirror By Mizuki TsujimaraReview: Bright Burning Things By Lisa HardingReview: The Smash-up By Ali BenjaminAn Interview With Femi Kayode - Author Of Lightseekers
Oracle provides a cleverly conceived plot, delivered via an engaging narrative that keeps the pages turning. Anderson has once again produced an intriguing tale of mystery, murder, and high drama. Underpinned with the mysticism of Greek mythology, and capturing nuances of a modern landscape with which we may not be familiar, we experience characters and personalities artfully drawn, with pacy, terse and dynamic dialogue – all in all, this novel is one to recommend!


Oracle is published by Claret Press