So Long, And Thanks For All The Fish

Another deadline has passed for Britain to negotiate a new trade deal with the EU. So far, we’ve passed deadlines in July, October, two in November and another couple in December. I wouldn’t worry about it though. Like Covid waves and lockdowns, there’s always another one coming along. 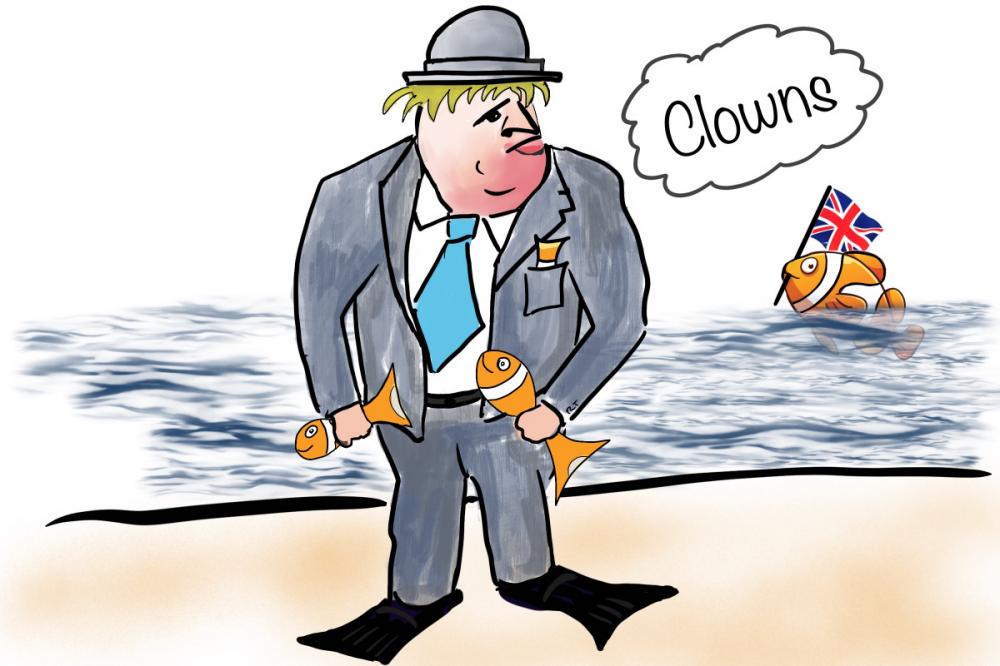 The bottom line is that it’s all about the bass – the sea bass, that is. The only thing the two sides still seem to be arguing about is fish. Fishing is, of course, a vitally important industry to the UK, employing nearly as many people as Debenham’s, and we’d never let something that size collapse, would we? Oh.

In this failed relationship, as the Brexit divorce is finalised our government seems to be rather more concerned about who gets the tropical aquarium than with working out who will look after the children. But for Boris Johnson, when it comes to looking after children, it’s always someone else’s responsibility. After all, this is a man who can recite the opening of the Iliad in ancient Greek but doesn’t know the words to “The Wheels on the bus”. He can make a bus out of wine boxes though.

The government has insisted on full sovereignty rights over our waters, and that all fish caught in them must stay in Britain. What will we do with all those extra fish? Personally, I’m still full from that oven-ready meal. I suppose there’ll be extra space for fish on the supermarket shelves because of the impending fruit and vegetable shortages. Or we could put the fish where the loo roll used to live before the runs on the triple-ply.

Anyway, is that the way it works now, that anything crossing into our waters automatically becomes British? It’s funny, that logic never seems to apply to refugees. Since the government recently appointed a Clandestine Channel Threat Commander to deter small boats crossing the Channel, perhaps he could combine roles and stop fish coming over at the same time. He could rig up some large nets, or wave machines, across the English Channel to stop French fish swimming into our waters. Or perhaps we could transport any immigrant fish to Ascension Island for processing and repatriation.

John Redwood even commented that we will soon be “controlling our own fish”. Controlling fish? Is he Aquaman in his spare time?

The newspapers have reported on the fish stand-off with suitable restraint, the Mail going with: “We’ll send in gunboats”. Amazing! I didn’t realise the Daily Mail had its own navy! Oh, I see. Anyway, who are we going to use these gunboats on? French trawlers? Are we prepared to start a war with France? You do realise that, unlike us, they have a working aircraft carrier? Anyway, doesn’t the owner of the Mail, Lord Rothermere, officially live in France? (Nothing to do with avoiding UK tax, obviously.) Whose side is he on?

At any rate, I’m not sure that attacking our French allies would go down too well with the rest of the EU, or NATO for that matter. Perhaps the press could ask Johnson if he’s willing to ‘push the button’ to blow up a few fishing boats, like they kept asking Jeremy Corbyn about nuclear weapons. Surely there’s no point having a gunboat deterrent if you’re not prepared to use it, eh?

With negotiations starting to flounder, Johnson decided to turbot-charge them, dashing to Brussels to meet for dinner with the President of the European Commission, Ursula von der Leyen. Johnson is, after all, a dab hand at talking pollocks. To many of the papers, the dinner menu was judged to be deliberate provocation, featuring two fish courses. (The nationality of the fish was not declared.)

Johnson also attempted to bait Angela Merkel and President Macron into a meeting to try to bypass the negotiating teams, but his offer was thrown back. Many Tory MPs took to Twitter to post exactly the same message: “I stand with millions of Britons that are deeply insulted at the shocking news that the German Chancellor has refused the Prime Minister’s request for a telephone call”. I assume the MPs were just following orders.


Also by Roger Winterbottom...
Operation Close Stable DoorThe Lockdown ThreequelReview: Troubled Blood By Robert GalbraithYou Can't Beat A Bit Of BullyI'm A Nonentity - Get Me Out Of Here!
With still no agreement in sight, the Mail on Sunday announced that Johnson would now be taking control of no deal preparations. I don’t know about you, but I feel safer already. But really, over the last few months, is there anything for which he hasn’t announced he’s taking personal control and responsibility? The Coronavirus response, getting children back to school, air bridges, Brexit negotiations, lockdown plans, care homes. Whatever will he take control and responsibility for next? Maybe some more of his children?

With No Deal looming, numerous Conservatives took to the airwaves to reassure business and the public, Oliver Dowden comforting us by saying, “It will be choppy but we can survive.” Oh good, because at first I was afraid, I was petrified. Iain Duncan-Smith also chipped in with some heartening comments: “This isn’t going to be complete Armageddon.” Er, thanks, Iain. I don’t remember that as the selling point in the referendum. No room for long words like “Armageddon” on the side of the bus, eh?

The Mail on Sunday tried to pep us up further, running an article on ten ways to make Brexit a success. “Cheddar instead of brie, swap avocado for eggs on toast,” it began. Fair enough. Anything else? “Buy a second home” in the UK. Right. I hope your universal credit stretches that far now that the pandemic has taken your job. They also suggested buying a British-made car. You’d better hurry though, as they all seem to be moving production to France. You might still be able to get an Aston Martin.

Regardless of Deal or No Deal, in just a couple of weeks’ time we’ll be fully out of the EU, no ifs or halibuts. I remember when Boris Johnson banned any mention of Brexit after we officially left back in January, since it was supposedly all done and dusted and there was nothing more to be said. Even then, the whiting was on the wall. As the negotiations continue to limp on towards the end of the year, the Remainers are still carping, pointing out the benefits of being in the EU: “Britain’s continued membership of the EU would be a boon for the world and for Europe. This is a market on our doorstep, ready for further exploitation by British firms…Why are we so determined to turn our back on it?” Oh, sorry, my mistake: that was what Boris Johnson wrote in 2016 before he decided which side he was going to be on.