Verstappen Flies ﻿From 10th To Victory In Hungary

Just days after the chequered flag had flown in Le Castellet at the end of the French Grand Prix the Formula 1 circus set up camp at the Hungaroring, just outside Budapest, and after today’s Hungarian Grand Prix it was Red Bull’s Max Verstappen who climbed onto the top step of the podium to receive the winner’s trophy after starting from 10th on the grid.


Max Verstappen exceeded his expectations with victory at the Hungaroring
Two major news stories have dominated the F1 headlines since the previous race. Firstly, the 2023 driver market sprang back to life last Thursday when Sebastian Vettel revealed that at the end of this season he will be retiring from Formula 1 after a highly successful career in motorsport’s highest category which began back in 2007. As the longstanding truism about F1 states, it’s extremely difficult as a driver to get onto the grid and ever harder to stay there, so all credit to the highly gifted and likeable four-time champion for surviving for so long in the well-known Piranha Club. The key question now is about whom Aston Martin will select to replace him, with Mick Schumacher a potential candidate if he is considered experienced enough and is also happy to sever his ties with Ferrari.


It’s a tough circuit for overtaking, with the best opportunities being into Turns 1 and 2 assisted by DRS, and one-stop strategies are usually preferred due to the importance of retaining track position.
The team’s existing reserve driver, Nico Hülkenberg, cannot be ignored, although executive chairman and team owner Lawrence Stroll may prefer a higher profile candidate such as Fernando Alonso. Any such move would conveniently free up a race seat at Alpine for its rising star in waiting Oscar Piastri. With the underperforming Daniel Ricciardo still contracted to McLaren for next season, the Woking based outfit may be keen to take on Piastri itself and soften the dropping of Ricciardo with a possible move to Aston Martin. There are many potential scenarios and all should become clear in due course. One thing for sure is that a queue of willing drivers will have quickly formed at Stroll’s door ever since Vettel announced his forthcoming departure.

The other major news story is about Porsche’s potential future partnership with the Red Bull Formula 1 team with effect from 2026 when the new powertrain regulations are set to be introduced. A possible acquisition of a 50% holding has been mooted. However, Red Bull has indicated that getting to this stage could be a lengthy process, with everything still only at the discussion stage at the moment. One understandable factor is that Porsche wants the FIA governing body to publish exact details of the new regulations before making such a major commitment.


A relaxed Seb Vettel was happy to talk about his retirement decision in Hungary
Formula 1 has also launched a new campaign called Drive It Out, which is aimed at combatting fans abusing each other, the drivers and senior team personnel both online and in person at Grand Prix weekends. Over the years F1 fans have tended to be both knowledgeable and passionate, but there has been a growing trend towards extreme behaviour by a minority. Online forums have long given fans an opportunity to share their views, but this activity can at times start to get out of hand and the unacceptable behaviour of some of those attending the recent Austrian Grand Prix has prompted this new initiative to be introduced. It is fully supported by the FIA and every team, with the Formula 1 CEO Stefano Domenicali, the FIA President Mohammed Ben Sulayem and all 20 current drivers featuring in a video condemning all such abuse.

The weather is often changeable at the Hungaroring and “wet but improving” best described the circuit for yesterday’s final practice period. In the challenging conditions the drivers struggled at times to remain on the track and Vettel triggered a brief late stoppage after spinning off at Turn 10. It was actually Williams’ Nicholas Latifi who ended up setting the best time on the drying circuit followed by Leclerc, Alex Albon in the other Williams and Verstappen. The clouds overhead were ominously dark as the qualifying hour began, but fortunately the track remained dry and, just when Sainz and Leclerc had looked set to claim the front row for Ferrari, Russell put in a brilliant lap to snatch pole position from them. It was the first of his F1 career and was highly popular with many of the fans in the main pit straight grandstand. Norris was fourth ahead of the pair of Alpines and seventh placed Hamilton, who suffered a DRS issue. It certainly wasn’t Red Bull’s day as Sergio Pérez was eliminated in the second part of qualifying and Verstappen suffered a power loss during the top ten shootout and was destined to start tenth on the grid, just one place ahead of his team-mate. Red Bull subsequently decided to fit fresh engines from this year’s allocation to the cars of both Verstappen and Pérez and so both were still set to start from the same grid positions.


The highly likeable George Russell claimed a first pole before finishing third again
No points are earned for qualifying though and Russell, whilst delighted with his pole success, was already focussed on giving of his best in this afternoon’s Grand Prix when points very much were up for grabs. It was noticeably cooler and windy as the three pm local time start neared with a real threat of rain in the air and, with the 24 year old rising British star from King’s Lynn up front just ahead of the two Ferraris and Norris and with the Drivers’ Championship leader only mid grid, there was a real sense of excitement and anticipation. Mercedes opted to start Russell on the grippiest soft specification tyres, hoping to hold off the medium shod Ferraris, and when those famous red lights went out that’s exactly what happened, with the top four maintaining station and Hamilton jumping a couple of places to fifth.

After an early Virtual Safety Car period to enable debris from Albon’s Williams to be cleared Verstappen started his charge towards the leaders and by lap 11 had climbed to sixth before he and Hamilton swept past Norris. The first pit stop phase began six tours later when Russell and Verstappen switched to medium rubber and Sainz had more mediums bolted on, with Hamilton and Leclerc soon stopping too for more mediums. This left Russell still out front ahead of the Ferraris, but we soon had a great scrap as Leclerc pushed Russell hard before sweeping past round the outside at Turn 1.


... this brings the first part of the 2022 Formula 1 season to a close, with 13 Grands Prix and two Sprint races completed.
Come lap 39 a charging Verstappen pitted for another set of medium tyres, whereas one tour later Ferrari brought Leclerc in for the unfavoured hard tyres after already having used two sets of mediums for the Monégasque driver. Russell also stopped for another set of mediums. With an unhappy Leclerc struggling on the hards, Verstappen usurped him at the opening corner on lap 41, running third but crucially only behind the still to stop again Sainz and Hamilton. A subsequent spin for the Dutch racer at Turn 13 meant he had to catch and pass Leclerc again, which he soon did, and after Sainz and Hamilton had pitted again he found himself in the lead ahead of Leclerc and Russell.


Lewis Hamilton was the best of the rest behind Verstappen
On lap 54 of 70 Russell claimed second place from Leclerc and the latter quickly headed down the pit lane to offload his unloved hard tyres for softs. By this stage Hamilton was making excellent progress on his own softs and passed Sainz for third and then Russell for second. A late Virtual Safety Car intervention was needed for the stricken Alfa Romeo of Valtteri Bottas to be moved to a safe position and when racing resumed the gap to the leading Verstappen was far too big for Hamilton to attempt to close. The multiple champion did claim the extra point though for the fastest lap of the race.

Today’s race meant that Verstappen added a further convincing victory to his season’s tally, extending his Championship lead, and the two Mercedes drivers were happy to again finish on the podium, just as a week ago in France. With Sainz fourth and Leclerc sixth today after starting second and third, things were far less happy though in the Ferrari camp. 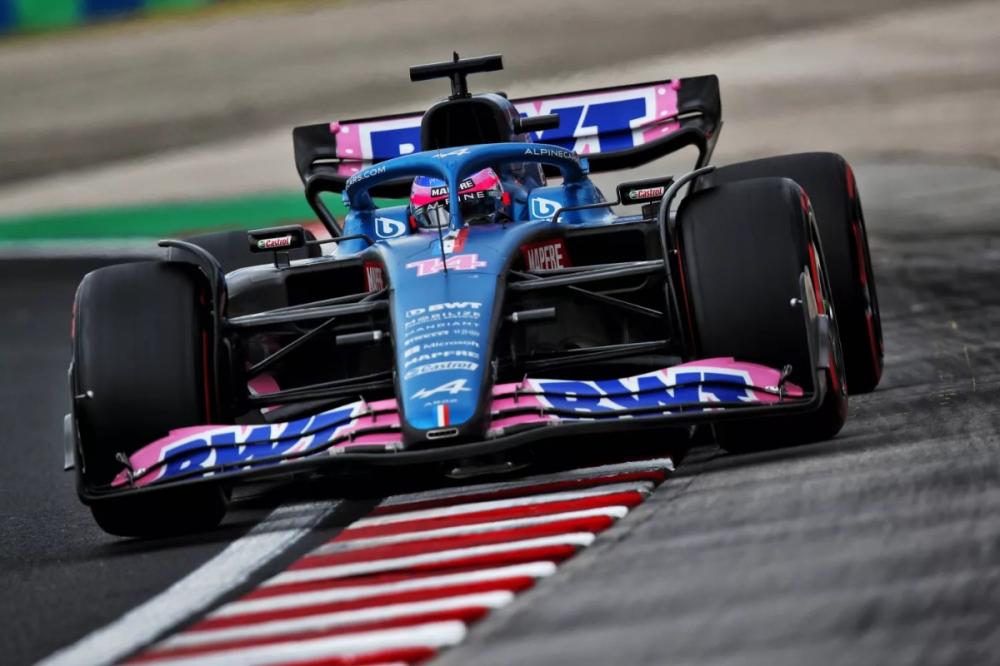 Alpine’s Fernando Alonso may be 41, but he still knows how to drive an F1 car very quickly
So this brings the first part of the 2022 Formula 1 season to a close, with 13 Grands Prix and two Sprint races completed. Red Bull has reached the summer break with a 97 point advantage over Ferrari in the Constructors’ Championship, with best of the rest Mercedes steadily improving, and Verstappen tops the Drivers’ Championship table, 80 points clear of Leclerc. However, there are still a further nine Grands Prix and a third Sprint to follow, starting with a visit to Belgium’s iconic Spa Francorchamps circuit in late August, and everything is still to fight for before this year’s spoils are settled.


Also by Graham Read...
Teesside’s Sarah Hall To Race At Croft This WeekendOscar ﻿Piastri At Centre Of F1 Contracts RowAlonso To Race For Aston Martin From 2023 OnwardsFour-Time F1 Champion Vettel To RetireVerstappen On Top In France Ahead Of Mercedes Duo