Will Johnson The Pleasure Bot Have a Premature Relaxation?

Asked last year at Prime Minister’s Questions to empathise with families grieving for relatives lost to Covid, Boris Johnson appeared unable to take it seriously, instead inappropriately heading below the waistline to make a poor joke about underpants. It seems Johnson has often struggled throughout the crisis to treat it with sufficient gravity, with a tendency to trivialise it through his language, talking about “squashing the sombrero” and “Operation Last Gasp”.

This week at PMQs, Keir Starmer revisited the question about bereaved families, once again seeking empathy for them. It was nice to see that Johnson’s claim at the previous day’s press conference that he took “full responsibility for everything the Government has done” lasted less than twenty-four hours, rather like the responsibility Johnson has taken for impregnating his mistresses. Johnson seemed stuck in a loop, replying to all Starmer’s questions with the same response: “SAY SCHOOLS ARE SAFE! SAY SCHOOLS ARE SAFE!” It was like an educationally obsessed Dalek which has forgotten that its primary mission is to subjugate other species and take over the universe, and is instead focusing on securing universal schooling. I’m still not quite sure why Starmer didn’t calmly point out that schools are so safe that Johnson has closed them all. 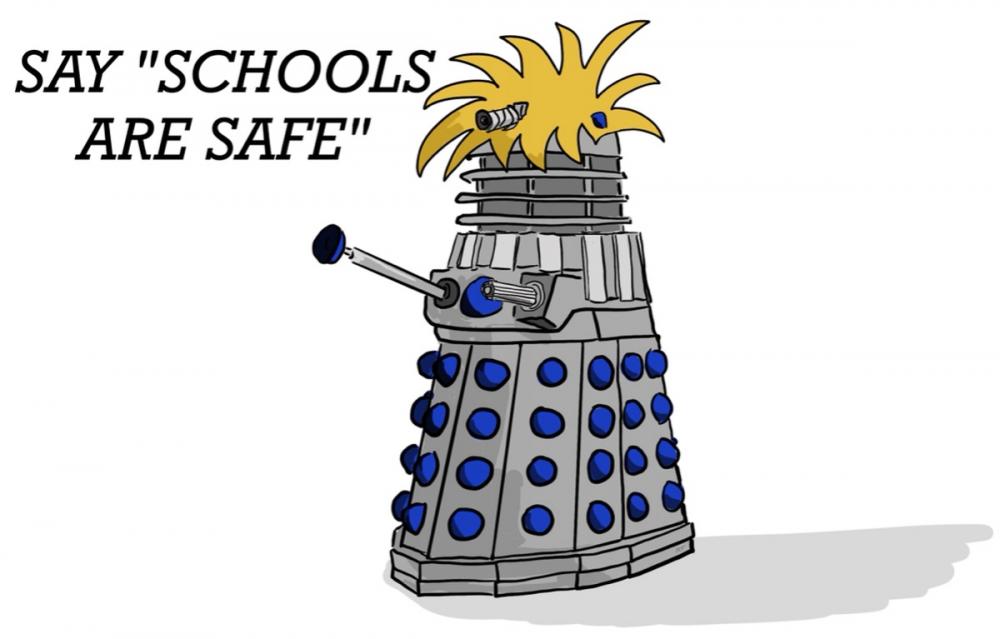 I wonder though: lacking human empathy; getting trapped in a loop; the trail of wives and mistresses. Are we sure that Johnson isn’t some sort of artificial intelligence pleasure robot, like Jude Law’s character Gigolo Joe in the film, A.I.? Admittedly, a short, dishevelled, portly robot may be more of a niche demand than one that looks like Jude Law; but different strokes for different folks, eh?

Perhaps we ought to apply the Turing test to Gigolo Johnson to determine whether he can convince us that he is in fact human. Let’s see how he reacts when presented with a straightforward question, as he was by Sam Coates of Sky last week.

“Do you think,” said Coates, “as some senior politicians in Britain seem to, that President Biden is ‘woke’?”

Sounds easy enough for a human to answer, I’d say. Let’s see if the Johnson-bot can persuade us he’s truly one of us.

Hm. That’s not a great start. I tend to get the same response from Alexa if I ask her to play something by Hildegard von Bingen.

“I…I…I’ve…I…what I KNOW,” he over-emphasised, “is that he’s a fervent believer in the transatlantic…er… ALLIANCE.” All right, Boris, don’t stress your circuits. “And…um…er…and…er…that’s a great thing.”

Boris - I’m not sure you’re answering the right question: would you like to reboot and try again?

“And,” he continued, “a believer in a lot of the things that we want to achieve together and…you know, in so far as…um…nothing wrong with being…being WOKE if…” Now this is better. He seems to have finally worked out what the question was.

“But if…but what I can tell you is I think that’s it’s very important for…er… everybody…and…er… I would certainly put myself in the category of people who believe that it’s important to stick up for your…your history, your, your, your traditions and…er…things…and your, your values, things you believe in.” Oh dear. No, I’m afraid that’s really not going to convince anyone that he’s human. Maybe it’s better if he sticks to his primary sexbot function.


Also by Roger Winterbottom...
Honesty Is One Of A Range Of OptionsOperation Close Stable DoorThe Lockdown ThreequelReview: Troubled Blood By Robert GalbraithSo Long, And Thanks For All The Fish
He does, after all, have form when it comes to an excessive focus on sex, including regularly resorting to innuendo and sexual metaphor. At the Tory conference of 2018 he suggested that he wanted to “put some lead into the collective pencil” of the party. Another time, he said that if Trident were at sea without missiles, it would mean that “the whole country is literally firing blanks”. Then there is his notorious remark that money spent on historical child abuse allegations was being “spaffed up a wall”.

None of this compares to when he was a car ‘journalist’ however. Reviewing a Ferrari, he wrote at one point that “it was as though the whole county of Hampshire was lying back and opening her well-bred legs to be ravished by the Italian stallion”. Unless he was thinking of Rocky Balboa, he appears to be suggesting some kind of inter-species relationship. I seem to remember that didn’t end too well for Catherine the Great, though perhaps the county of Hampshire is a little more resilient.

But maybe Johnson knows something about horses that we don’t. I do recall he said that he liked hunting because of the “semi-sexual relation with the horse”, which certainly gives a whole new perspective to “strong and stable” government.

Even as the number of Covid deaths was approaching one hundred thousand, Johnson could not take the situation seriously enough to avoid doing his Finbarr Saunders impersonation, seemingly unable to resist the lure of slipping in a double entendre. Discussing the easing of lockdown and the vaccination programme, he said that he didn’t want to spoil the good work of the programme “by having a premature relaxation.” Oh, Boris. There’s nothing to be embarrassed about. It wouldn’t be the first time that it’s happened to you.

Despite Johnson’s attempts to slow down and delay almost everything during the Covid crisis (lockdown, border controls, test and trace, decisions on schools, PPE supply), when it comes to loosening restrictions, his relaxation always comes prematurely. But maybe if he concentrates really hard this time – perhaps by thinking about Michael Gove – he’ll manage to hold it back until the right moment.