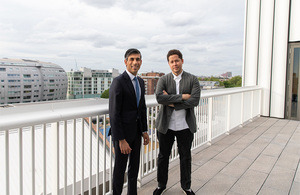 During a Royal College of Art’s (RCA) reception on Tuesday evening (10 May), Rishi Sunak announced that Mr Armitage’s new design will celebrate the “culture, creativity, and heritage and history” of the UK in the 21st century.

Mr Armitage is one of Britain’s brightest artists, weaving his East African and British heritage to produce complex, lyrical works that draw from past and current events, recollections and mythology, popular culture and art historical references to reflect the rich heritage of modern Britain.


Speaking at a celebration of the RCA’s new design and innovation campus, which includes the Rausing Research and Innovation Building, Chancellor Rishi Sunak said:
"I am delighted that Michael will lend his vision to the creation of this new £1 coin design in its 40th anniversary year. This coin will symbolise the rich tapestry of modern Britain and honour our deep heritage and history."


Mr Armitage was born in 1984 in Nairobi, Kenya and lives and works between London and Nairobi. He received his BA in Fine Art from the Slade School of Fine Art, London (2007) and has a Postgraduate Diploma from the Royal Academy Schools, London (2010). In January 2022, the Royal Academy of Arts, London, elected him a Royal Academician in the category of painting. Armitage will be the subject of a major solo exhibition at Kunsthalle Basel in May 2022, which will travel to London’s White Cube gallery in September.

Mr Armitage was chosen by the Chancellor on advice provided by an independent panel with expertise in coin design and art, established to assess the artistic merits and ideas behind proposals put forward by selected candidates.

The design will become the standard circulating £1 coin and will include the current world-leading high security features to protect against counterfeiting. This is the first time that the new 12-sided £1 coin has been redesigned since its introduction in 2017.

Cash remains vital for millions of people across the UK and around 5.4 million adults rely on cash to a great extent in their daily lives and this government is committed to protecting access to cash. Today (Tuesday)’s Queen Speech confirmed that the government will bring forward legislation to ensure the continued provision of cash withdrawal and deposit facilities in the UK so that our cash infrastructure is sustainable for the long term.

The RCA’s new campus in Battersea, which includes the Rausing Research and Innovation Building, was supported by £54m of government funding from the Treasury. The new campus embodies the College’s transformation into a dynamic, STEAM (Science, Technology, Engineering, Art and Mathematics)-focused postgraduate university, expanding into computer and materials science, robotics, advanced manufacturing, complex visualisation and data science, and intelligent mobility, enabling its students to tackle some of the most pressing challenges of our times