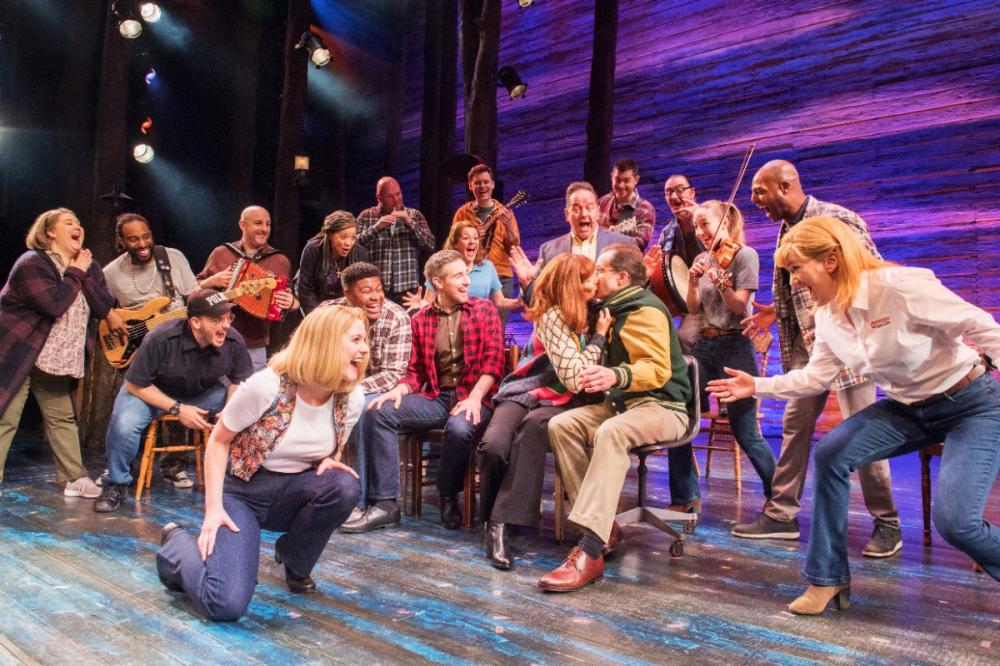 It will be remembered as one of the darkest days in American history: September 11th, or 9/11, was the day when terrorists flew two planes into the now infamous Twin Towers, throwing New York into chaos and triggering military conflict from which the world is still reeling.

But, despite all the horror and loss of life in 2001, some green shoots of optimism did appear, none more so than in the shape of Irene Sankoff and David Hein’s musical, Come From Away, which is an absolute triumph of humanity.

Currently running at the Phoenix Theatre off London’s Leicester Square on Charing Cross Road, it won every major Best Musical award when it opened in the West End in March 2019 and I was fortunate enough to see it ahead of Thursday’s 9/11 20th anniversary. 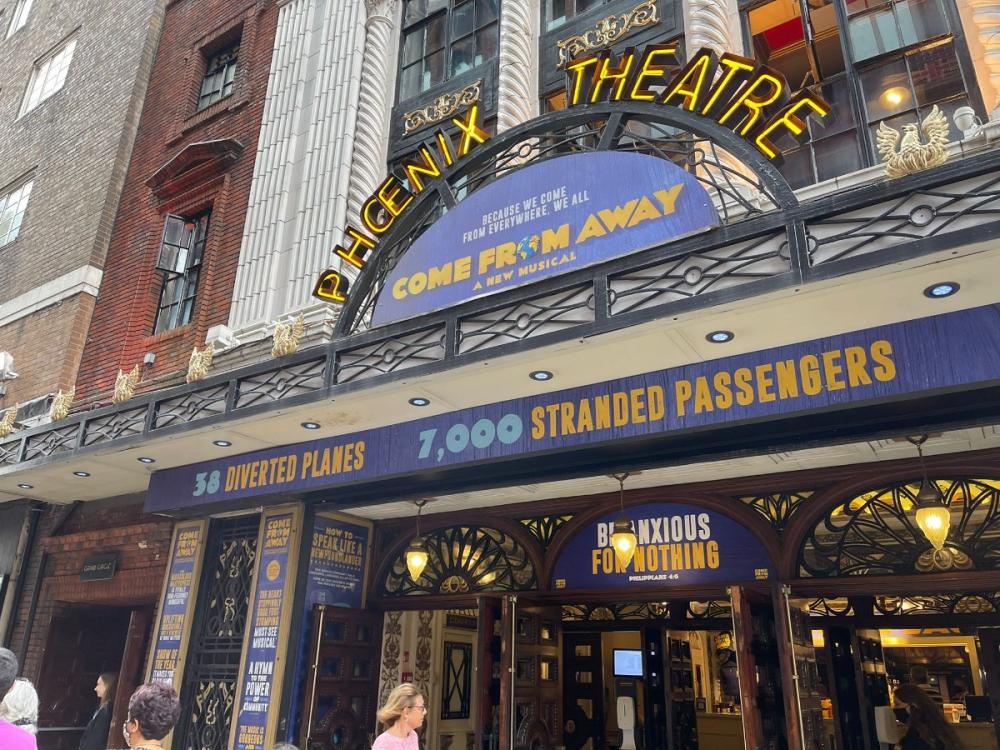 It tells the remarkable and inspiring true story of 7,000 stranded air passengers – prevented from landing in New York in the wake of the terrorist attack – whose planes were diverted to the small town of Gander in Newfoundland, Canada, for five days.

There, confusion, fear and chaos reigned among travellers as members of this new, extended family got to know each other, speed dating style, in a matter of days, and during what can only be described as exceptional circumstances.

Claude Elliott, Gander’s former Mayor, has watched himself portrayed by different actors more than a dozen times. “And each time you feel how useful this good news story is. On 9/11, we saw the worst that could happen, but around 7,000 people in that tragedy saw the best in humanity.”

It fell to Claude and the mayors of neighbouring towns to work out how to accommodate the passengers - many of whom didn’t speak English, or had challenging dietary, religious or medical requirements – and crew, at a time of extreme suspicion and fear.

“We didn’t sleep,” says Brian Mosher, who in 2001 was a volunteer presenter at the local television station, the Rogers Community Channel.

Two of his radio colleagues went on air the night the planes landed to ask people to bring blankets, mattresses, toiletries and food to school and community halls in Gander and the surrounding area in advance of the arriving ‘guests’ (the few local hotel rooms were reserved for pilots and crew, who had to be rested in case they had to fly out at short notice.)

Bonnie Harris, who worked in Gander’s animal shelter, realised there would be animals in the aeroplane holds and made it her mission to care for a menagerie of 19 that included dogs, cats and two bonobos, a male and a pregnant female, heading for a zoo in Ohio. 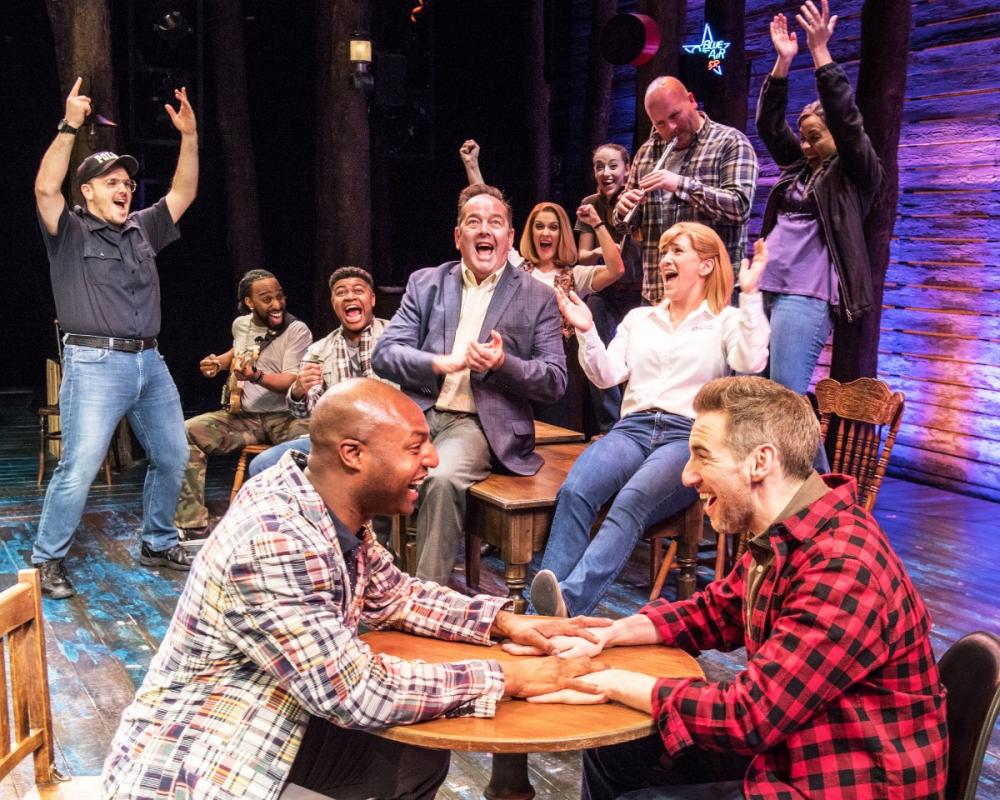 There was the gay couple terrified that homophobic Newfoundlanders would ‘find them out’, the world-famous Muslim chef who was treated with suspicion by other passengers once they began to understand the gravity of what had happened, and the woman constantly seek phone reassurance that her firefighter son was safe in all of New York's chaos.

But the great triumph of this unexpected union of strangers was the story that plays such a key part in the Sankoff Hein musical. English oil executive Nick Marson and his American wife, Diane, each with a marriage apiece behind them already, met and fell in love during their five days in Gander and married the next year, honeymooning in Newfoundland.

Initially they turned down media interviews as they had survivors’ guilt. “We had found tremendous happiness in the wake of such a disaster,” said Nick. But, they told their story to Come From Away’s writers and have since travelled from their home in Houston to see it nine times.
Here is a story about humanity, the generosity of good people and, as one critic put it: “A life affirming celebration of human decency.”

It will not only leave you dancing in the aisles but will make you want to shed more than the odd tear and, with no word of a lie, it is the only musical I have given an unprompted standing ovation to in more than three decades.....along with the rest of the audience of course!

The other was Michael Crawford in Barnum!
THE CAST
Gemma Knight Jones (Falsettos, Sister Act UK Tour, Hairspray UK Tour, The Curious Incident of the Dog in the Night-Time) will play Hannah and others, and Sam Oladeinde (Hamilton, The Book of Mormon, A Christmas Carol, The Prince of Egypt) will play Bob and others.
They join the current London cast Jenna Boyd (Beulah and others), James Doherty (Claude and others), Mary Doherty (Bonnie and others), Mark Dugdale (Kevin T/Garth and others), Alice Fearn (Beverley/Annette and others), Kate Graham (Diane and others), Alasdair Harvey (Nick/Doug and others), Jonathan Andrew Hume (Kevin J/Ali and others), Harry Morrison (Oz and others), and Emma Salvo (Janice and others) with Chiara Baronti, Ricardo Castro, Stuart Hickey, Sorelle Marsh, Alexander McMorran, Micha Richardson, Jennifer Tierney and Matthew Whennell-Clark.

TICKETS
Come From Away is produced in the UK by Junkyard Dog Productions and Smith & Brant Theatricals. The European premiere of Come From Away was co-produced with the Abbey Theatre, Ireland’s National Theatre.

Tickets for Come From Away at the Phoenix Theatre are available via comefromawaylondon.co.uk.