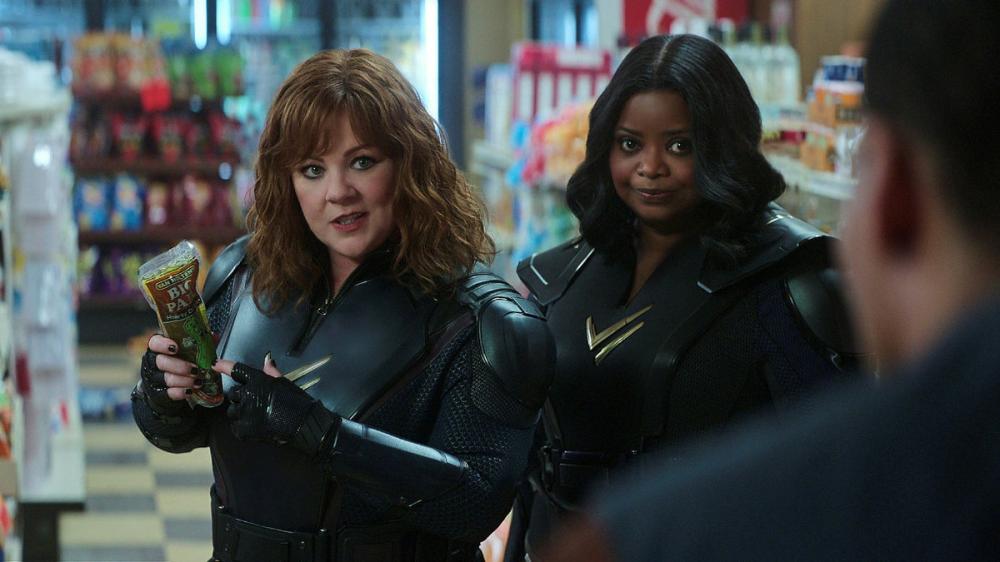 When it comes to director Ben Falcone (Tammy, The Boss, Superintelligence), it really is a case of you know what you are getting, and you are either cool with that fact or not. Yes, his collaborations - this marks his fifth - with the sometimes divisive (why? She’s a great and versatile actress) Melissa McCarthy has yielded a sometimes scattered record (though I really really enjoyed Life of the Party), if not one as bad as some make out. And in the case of their latest offering Thunder Force, we have a superhero comedy that certainly is no Mystery Men but is a reasonably pleasant watch from Netflix.

When super villains are born from an unexpected event, the world struggles to combat them for years. That is until dedicated and talented scientist Emily (Octavia Spencer) accomplishes her long fought goal and finally develops a process to give super powers to normal people, unfortunately her estranged best friend Lydia (Melissa McCarthy) accidentally finds herself “gifted” with some of these abilities, as these two pals now must come back together, not just for their own good but the good of the world.

I’ve certainly seen better (Deadpool and Kick-Ass) films that take comedic aim at the superhero genre, and I have seen a great many worse (Superhero Movie, Hancock). Falcone’s script does not quite nail the modern outlook of the genre in ways that films like Teen Titans Go! To The Movies does, nor does it harness the golden age goodness for laughs in the same way Shazam did, in fact, this film almost feels like a send up of the genre’s developing years before the boom, sometime around that early noughties, where things were being attempted but the breakout (which ended up being Christopher Nolan’s Batman Begins) was being eagerly awaited.


Also by Jack Bottomley...
Review: The Mitchells vs. The MachinesReview: Promising Young WomanReview: CollectiveReview: Godzilla Vs. KongReview: The Dissident
Yet, in spite of this more simplified aim, this film still manages to be a fun enough time and quite accessible to viewers both clued up and less in the know when it comes to super heroes. Thunder Force’s world of gifted sociopaths named “Miscreants” is an interesting one and some of the action sequences are well delivered too. However, what benefits Thunder Force immeasurably is the talents of its likeable lead duo, as well as some unforeseen moments that embrace the odd, especially when it comes to Jason Bateman’s enjoyably distinctive part-crustacean side baddie ‘The Crab’, which inspires some almost Shape of Water-esque sequences.

McCarthy plays another tough but kind hearted - if unlucky - character, and strikes up a good chemistry with Spencer, who brings her usual dedication and warmth to the part. This lead duo manages to leap past some of the uneven gags and script and dwell on the positives, and you are happy to join them for the ride, in what is all round a rather well intentioned adventure of friendship.

Nobody will exactly be re-writing the rulebook after this one but it passed the time quite agreeably for me, and if not nailing a complete superhero landing, it still entertains in its mission.

Nice theme song too, which comes from the combined talents of Slipknot’s Corey Taylor, Halestorm’s Lzzy Hale, Anthrax’s Scott Ian and Slayer’s Dave Lombardo (among others) would you believe!